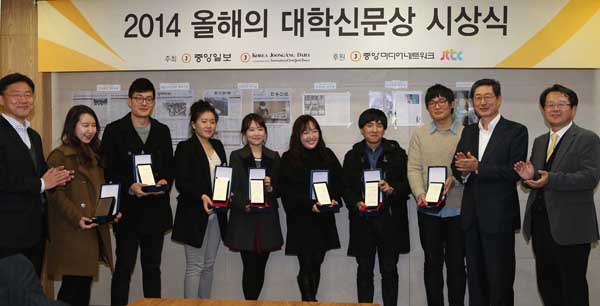 SNU and HUFS were co-recipients of the Best Article Award, and SWU won the Best Layout and Design Award. The award was 500,000 won ($446) each.

He said SNU’s English newspaper, the SNU Quill, has “done an excellent job of portraying the reality of domestic universities” in their article “SNU steps up to the spotlight of change to adopt diversity.” Ryu praised the Argus from HUFS for writing about “very timely matters” in its article, “The ‘Globalized’ HUFS Campus: How Global is it Really?”

In evaluating SWU’s submission, “The Cruelest Month,” Ryu cited Kim Jin-ho, Korea JoongAng Daily’s Layout and Design Desk editor, saying that it “showed that the reporter put a lot of deliberation into the work” and that the layout was “well organized.”

The Sookmyung Times won the Best Design and Layout Award for putting together eight pictures of the memorial altar in front of Seoul City Hall in the wake of the Sewol disaster.

“It took six to seven hours for me and my cub reporter, Lee Su-jin, to take those photos,” said Koo Gyo-hyun, chief editor of the Sookmyung Times. “Next year, I hope we also win the Best Article Award.”

Park Ji-yeon’s submission in the Argus, the English newspaper of HUFS, was a skeptical article about the university’s top internationalization ranking often cited in local college evaluation reports.

“In order for us to publish our monthly, we need authorization from the school,” said Kim Min-jeong, the chief editor of the Argus. “I heard that the president wasn’t really fond of our article criticizing the school, and I felt a bit jittery hearing that.”

Working as the chief editor of a college newspaper with no funding from the school, Son Young-min from the SNU Quill said the prize money was a huge “financial boost” for the paper.

This year’s contest was split into two: One focused on Korean-language college newspapers while the other evaluated English entries.