Korean trove is in a Nara museum

Korean trove is in a Nara museum 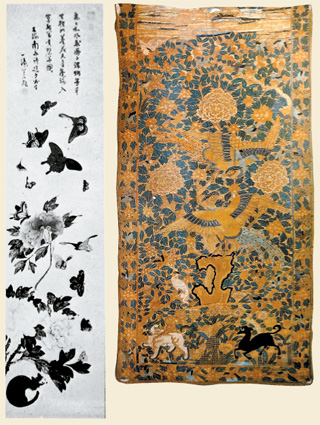 Right: A Joseon king’s standard that Japan plundered during the 1592-98 Imjin War. Left: A painting by Nam Gye-u, who was famous for depicting flowers and butterflies, considered a masterpiece of the Joseon era. [From a 1976 booklet published by collector Lee Yeong-gae]

A collection of 109 Korean art pieces that once belonged to Lee Yeong-gae, a Japanese colonial-era art dealer, was revealed to be stored at the Nara National Museum in Japan.

These cultural assets, referred to as the Lee Yeong-gae collection, are suspected to be pieces that Lee, a pro-Japanese businessman, took from the country when he escaped to Japan after Korea’s liberation from colonial rule.

The collection includes paintings and calligraphy of some of the greatest Joseon-era artists such as Kim Hong-do, Jang Seung-eop and Oh Se-chang. Some pieces are on the level of being national treasures.

A source told the JoongAng Ilbo that the current owner of the collection has trusted the Nara National Museum in Nara Prefecture, south-central Japan, to store the 109 pieces.

After Lee died, the collection was managed by his family before it was passed into the hands of the head of a Japanese confectionery company.

The confectionery tycoon, because of difficulty of storing the collection and the danger of burglary, eventually gave it to the Nara National Museum for safekeeping.

However, the museum told the JoongAng Ilbo it could not speak of the collection and did not confirm whether it was in storage.

“It is the principle of the museum not to speak of private art collections,” it said.

It is common for Japanese museums to store private collections. The Nara National Museum owns a total of 1,862 pieces of art and stores another 1,994 private pieces.

Lee, who was born in 1906 in South Gyeongsang, went to Japan when he was 13 and worked his way up in low-ranking administrative jobs before returning to his home country.

By 1934, he had transformed himself into a successful entrepreneur and established himself as the head of an airplane manufacturing company.

He was briefly arrested by the Special Committee for Prosecution of Anti-National Offenders, which was established after Korea’s liberation to prosecute those who had been pro-Japanese and worked under the Japanese colonial government. But he was released soon after.

He escaped to Japan shortly after the May 16, 1961, military coup organized by former strongman Park Chung Hee.

Lee, who continued to work as an art dealer, apparently took his vast collection of cultural assets with him when he left Korea. The year of his death is unknown.

In 1976, Lee published a booklet titled “A Comprehensive Guide to Ancient Paintings of Joseon,” which includes pieces from famous royal court calligrapher Han Seok-bong, one of the era’s top painters Kim Hong-do, better known as Danwon, and celebrated calligrapher and scholar Kim Jeong-hui.

The Lee Yeong-gae collection is expected to include some key pieces by the great Joseon artists included in the 1976 booklet. This includes a painting by Nam Gye-u, who was famous for depicting flowers and butterflies throughout his life, which are considered masterpieces of the late Joseon Dynasty (1392-1910).

“While it has been known that Lee Yeong-gae dealt with Joseon-era paintings and calligraphies, this is the first time that it has come to attention that the Nara National Museum has been storing such a vast collection,” said Lee Won-bok, director of the Gyeonggi Provincial Museum. “There is a need to investigate how many artifacts are being stored by the museum and what they are worth,” said Choi Eung-Chon, an art history professor at Dongguk University.

“There are many cases where Joseon-era paintings were properly sold, so it is difficult to conclude if the Lee Yeong-gae collection was illegally transferred. The best way possible might be to use a fair means, such as buying back the collection.”

In another case of obscured ownership of cultural assets, over four centuries ago, Korean Joseon-era naval commander Adm. Yi Sun-shin seized a golden fan of Hideyoshi Toyotomi, who ordered the Japanese invasions of Korea from 1592 to 1598.

This fan was taken from a Japanese vessel following Korea’s victory in the 1592 Battle of Dangpo, a naval skirmish between the two countries.

The fan had been a present from Toyotomi to Korenori Kamei, a naval official during the battle who fled once defeat was imminent, leaving behind the fan.

The fan was stored in a secret Joseon royal family vault for centuries.

But ahead of the 1910 annexation of Korea by Japan, the fan was transferred to the hands of a Japanese architect named Tadasu Sekino. Then it was reported to be passed onto the Japanese imperial family.

A Japanese imperial household spokesperson responded to the JoongAng Ilbo’s recent question on the whereabouts of the golden fan: “The person in charge said that the golden fan in question cannot be found.”

The Venerable Hyemoon, a Buddhist monk who heads the Committee for the Return of Korean Cultural Property, said, “The golden fan seized by Admiral Yi during the Japanese invasions is not only symbolic but is a great cultural asset that embodies the spirit of our people. At that time, the spoils of war belonged to the victor country, and furthermore, the fan was seized on Joseon soil, thus it should of course belong to Korea.”

He added, “Regardless of whether it should be returned or not, it is the responsibility of the Korean government to check with the Japanese imperial household to check if the golden fan seized by Admiral Yi is in its possession.”