Liverpool’s decline is complete after draw

Liverpool’s decline is complete after draw 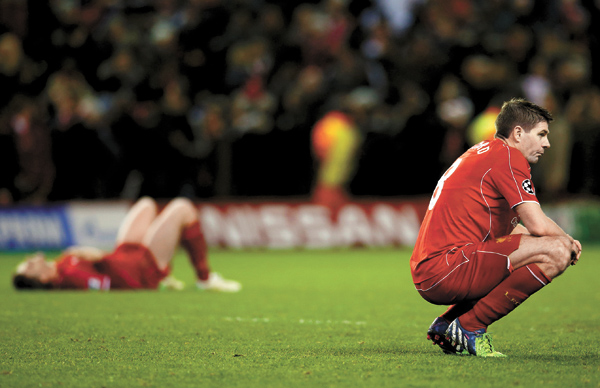 Liverpool’s Steven Gerrard reacts after losing to FC Basel in their Champions League Group B match at Anfield in Liverpool, England, on Tuesday. [REUTERS/NEWS1]

Liverpool’s fall from the European elite was confirmed on Tuesday, as Basel held the hosts to a 1-1 draw at Anfield to reach the last 16 of the Champions League.

Liverpool twice failed to beat Basel and was outclassed by Group B winner Real Madrid on returning from a five-year absence in a competition it once dominated, and twice reached the final when its inspirational captain was at his peak.

“You always qualify over the six games and unfortunately we haven’t been good enough,’’ Gerrard said.

Madrid completed the only perfect group-stage record of six wins after Cristiano Ronaldo’s penalty started a 4-0 rout of Ludogorets Razgrad. It also set a Spanish record of 19 straight wins in all competitions.

Juventus advanced with typical Italian caution, drawing 0-0 at home to Atletico Madrid which topped Group A. Olympiakos beat Malmo 4-2, and is rewarded for a third-place finish by joining the last 32 of the Europa League.

Arsenal is a near-permanent fixture in the last 16 but will once again be unseeded in the draw next Monday where Madrid and Bayern Munich are potential opponents.

Liverpool is heading to the Europa League draw, also Monday, after completing its group program with just a single win - and that due to a stoppage-time penalty against Ludogorets.

Another stoppage-time winner Tuesday would have sent Anfield into raptures but defender Martin Skrtel, playing as an emergency forward, poked a shot just wide of Basel’s right-hand post.

Switzerland’s champion extended its impressive record against English clubs, three years after it beat Manchester United in a decisive group match and 12 years after getting a last-day draw it needed to oust Liverpool.

Basel deservedly led through Frei’s neat, left-foot shot from the edge of the penalty area and was helped in the second half when Markovic’s raised right-arm was judged have struck chasing defender Behrang Safari in the face.

Defending champion Madrid took advantage of Ludogorets forward Marcelinho being sent off for handball which allowed Ronaldo to score from the penalty spot in the 20th minute. His 72nd career Champions League goal trails Lionel Messi by two.

Gareth Bale headed a second in the 38th, and a mismatch ended with late goals from Alvaro Arbeloa and Alvaro Medran.

Juventus will could be Italy’s only representative in the last 16 while Monaco gave resurgent France a second, joining Paris Saint-Germain which plays Barcelona on Wednesday.

Needing a draw to advance, a Monaco team which let superstar Colombia forwards Radamel Falcao and James Rodriguez leave in the offseason doubled its goal tally in the competition.

Arsenal threatened to humiliate Galatasaray after an opening goal from Lukas Podolski and two more from Aaron Ramsey earned a 3-0 lead within 29 minutes. Ramsey’s second was a stunning left-footed, half-volley from distance.

Netherlands veteran Wesley Sneijder scored late for the Istanbul club, before Podolski got his second in stoppage time.

The group stage comes to an end on Wednesday.