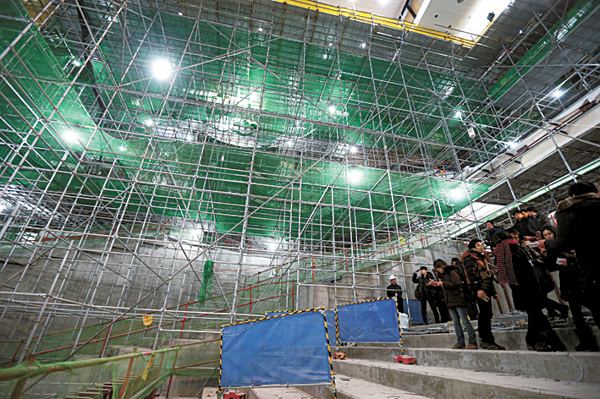 The accident site on the eighth floor of Lotte World Mall, where a worker was killed in a suspected fatal fall. By Kim Seong-ryong

A construction worker in the concert hall at Lotte World Mall in Songpa District, southeastern Seoul, died on Tuesday after reportedly falling more than eight meters to the ground.

The 51-year-old worker, surnamed Kim, was found bleeding on the floor at around 1 p.m. by a safety inspector who was checking the mall’s construction area.

When Kim was found, his skull was cracked and his neck bone dislocated.

He was subsequently transferred to Asan Medical Center but was announced dead before arrival.

“A safety inspector found Kim collapsed on the floor at the construction site and called the hospital immediately for emergency treatment,” Lotte said in a statement.

Kim was in charge of pulling down scaffoldings across the concert hall. However, it is not clear whether he died while working because his body was reported to have been found in an area where the scaffoldings had already been torn down, it added.

“We currently believe that he died from the fall,” a local police officer said. “However, we are currently looking into whether he died while on duty and whether Lotte’s reaction to the accident was appropriate.”

Lotte has since suspended construction on the hall to make way for the investigation. The company expressed its condolences to Kim’s family in its statement, released the day of the accident.

Lotte Hall was originally scheduled to open in September 2015 as an exclusive concert hall for classical performances. The venue can accommodate 2,018 people and will take up the seventh and eighth floors of the mall once complete.

The accident on Tuesday occurred on the eighth floor.

Lotte was criticized in April for belatedly reporting the death of a plumber who was killed while checking the pressure of the pipes and then fatally hit by a pipe component.

The company has been embroiled in controversy after a number of safety flaws were discovered at the mall.