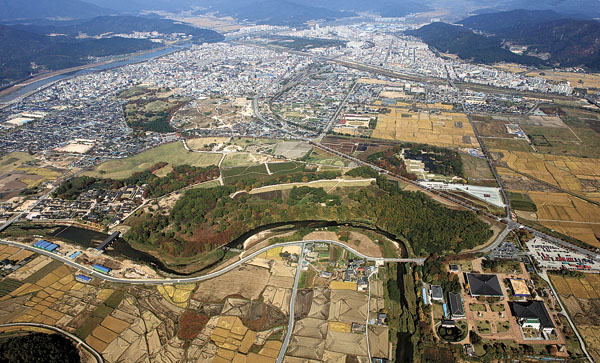 An aerial view of Wolseong, or the royal city of Silla Dynasty (57 B.C.-A.D. 935). Provided by the Cultural Heritage Administration

GYEONGJU - One of the most important archaeological explorations in Korean history kicked off last week in Gyeongju in North Gyeongsang.

The city, often compared to Kyoto, Japan, because of its rich history, was the capital of the Silla Dynasty (57 B.C.-A.D. 935) for almost 1,000 years. The exploration aims to uncover the royal city of Silla, known as Wolseong, which includes a palace and a fortress.

With this, insiders believe findings from the project may well make headlines in Korean media in coming years - or even months.

Wolseong, Korea’s Historic Site No. 16 and a Unesco World Heritage Site, is an area that measures more than 200,000 square meters (49 acres) in Inwang-dong, central Gyeongju. The name literally means Moon Castle, taking its cue from its celestially-shaped geographical features.

A defense facility near the fortress, left, and the foundation of buildings have been confirmed by the Korean archaeologists in Wolseong in the past. Provided by the Cultural Heritage Administration

It’s also known as Banwolseong, or Half Moon Castle.

First to be explored in the massive area of land is a section in front of the Stone Ice Storage, an ancient cooler, which is not so far from the seventh-century star-gazing tower Cheomseongdae, National Treasure No. 31.

During the Korea JoongAng Daily’s visit on Dec. 11, a week before a preliminary dig was to take place, the area was mostly vacant other than a group of tall pine trees with oddly curved branches standing tall in the mercilessly cold wind.

It is unclear, though, when exactly the Silla palace was built and destroyed. We can only guess what it might have looked like from “Samguksagi,” a historical text known as “The Chronicles of the Three States,” which indicates that Wolseong was built in 101 and used until 935 when Silla gave way to Goryeo Dynasty (918-1392).

Some time during the eighth century, Silla’s heyday, Gyeongju’s population reached one million. Historians say Gyeongju was comparable to Chang’an, an ancient Chinese capital known as Xi’an today; Constantinople in Europe; and Baghdad, a cultural, commercial and intellectual center for the Islamic world, during that time.

Compared to its historical weight, the Wolseong area was left largely unexplored. In 1915, a Japanese archaeologist uncovered animal bones and teeth, as well as grains and earthenware near the fortress. It is unclear where the relics are at present.

It wasn’t until the 1970s that another inspection took place. Between 1979 and 1980, the Korean government confirmed the existence of a gate on the eastern side as well as a defense facility called haeja near the fortress. Haeja was further explored between 1984 and 1985.

The government also confirmed the site of several buildings and wells in the northern and southern sides, having found foundations for such structures and roof tiles engraved with letters between 1985 and 2014 through trial digs and underground inspections using radar equipment.

“Inspections so far have been rather preliminary,” said Choi Maeng-sik, the director of the Gyeongju National Research Institute of Cultural Heritage. “And there hasn’t really been a real study of the palace itself.”

The first area to be explored until March - excluding days when the land is frozen - measures 57,000 square meters. Officials say they believe this was where the main structures such as the principal throne hall or the king’s bed chamber were situated.

Park Yun-jeong of the Gyeongju National Research Institute of Cultural Heritage - who is leading the exploration - says the institute has no doubt important discoveries will be made.

What worries observers the most is the 10-year time frame the Gyeongju institute and government have proposed for the exploration.

No on in Korea’s cultural properties field believes the project will be completed in a decade. Instead, they say 30 to 40 years are needed at least and caution against the rushing mentality that often causes slapdash restoration.

President Park Geun-hye chose the project as one of her pledges for the region during her presidential campaign.

But previous administrations have attempted a similar project. The first administration to pay attention to Gyeongju was that of Park Chung-hee, Park’s father.

Historians have increasingly called for the need to restore the Silla palace and its surrounding structures, like Daming Palace (“Palace of Great Brilliance”) in Xi’an, China, and Heijo Palace in Nara, Japan.