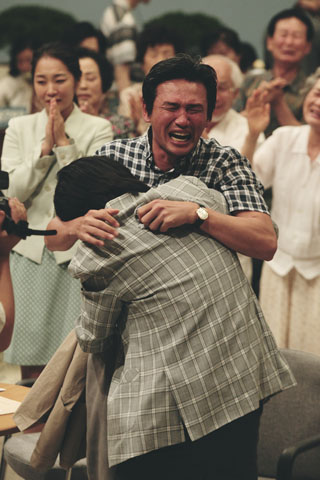 Domestic movie “Ode to My Father,” a heart-wrenching story set during the 1950-53 Korean War, opened with an audience of 1.1 million over the weekend, snatching first place at the local box office.

Within five days of its release, the CJ Entertainment film with an 18 billion won budget (about $16 million) had garnered 1.5 million moviegoers, earning 9 billion won.

This time around, director Youn Je-kyun, who won nationwide acclaim with his disaster film “Haeundae” in 2009, joined forces with guaranteed ticket-sellers Hwang Jung-min and Kim Yoon-jin.

Youn took a more ambitious bid with “Ode,” depicting the survival of Korea’s refugees in extreme poverty during the Korean War.

In the movie, Hwang plays the naive and good-natured boy Deok-soo, who becomes the head of his family at a young age when his father dies in the war.

In second place was Peter Jackson’s ambitious finale to his Hobbit trilogy, “The Hobbit: The Battle of the Five Armies.” The film debuted with an audience of 1.3 million, making 8.4 billion won domestically.

“My Love, Don’t Cross That River,” which achieved a milestone in the local indie film industry after its unexpected surge, was spotted in third place, dropping down two notches from last week’s first. Showing on 704 screens nationwide, the film picked up 766,413 cinemagoers this weekend, which brought its four-week total audience to 2.4 million.

The production cost of the documentary directed by Jin Mo-young was 120 million won, but it has made 18.7 billion won so far. The film is about an elderly couple who has been living together in the countryside for 76 years. Critics say it has pulled at the heartstrings of many viewers in their 20s because of its message about the true essence of love.

Younger viewers flocked to theaters this weekend, as shown by the audience figures for the popular animation feature “Pororo, The Snow Fairy Village Adventure,” which was in fifth place with 53,846 viewers.