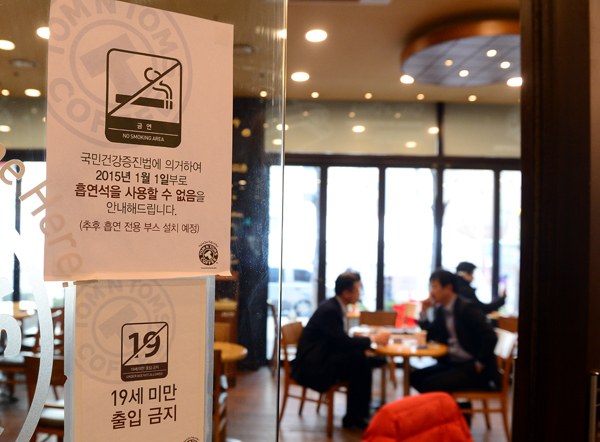 A “no smoking” sticker is attached to the door of a coffee shop in the Cheonggyecheon area in central Seoul. Beginning Jan. 1, 2015, the new smoking ban policy will be apply to all restaurants, coffee shops and bars nationwide regardless of floor space. [NEWSIS]

Starting today, smoking will no longer be allowed at restaurants, cafes or bars, regardless of their size, though it appears neither shop owners nor smokers are ready to accept the policy.

Previously, smoking was prohibited in about 150,000 shops that were 100 square meters (120 square yards) or larger, but the ban now also applies to about 600,000 smaller restaurants, coffee shops and bars nationwide.

Smoking will be allowed only if those stores set up ventilated smoking booths that are completely separate from where food or drinks are served. Still, the exception seems meaningless to most shops that came under the new year’s no-smoking policy.

The majority of cafes, which are expected to be most affected by the policy, especially those located in business districts, are not willing to build separate smoking booths.

“We are going to lose so many customers from 2015,” said the owner of a coffee shop in central Seoul, “but we can’t afford to turn the existing smoking area into a completely sealed off booth. So we are changing it into a meeting room and will ban smoking in the cafe.”

The situation is similar for franchise coffee shops. Caffe Bene, for example, used to have smoking seats at about 80 percent of its 920 branches.

“We gave a guideline to the owners of our branches earlier,” said Hong Ju-hye, a public relations official for Caffe Bene, “but none of them answered that they would set up a smoking booth that meets the requirements of the new policy.”

The news hasn’t been welcomed by smokers, either.

“I used to go to cafes where I could smoke with my co-workers during lunch time,” said one patron who was smoking in a cafe. “But it seems we need to find other places to smoke - probably the rooftop of our office building because people give us uncomfortable looks when we smoke on the street.”

Though the new policy is likely to have a huge impact on society, the government seems determined, maintaining that news of the ban has been out for a few years.

“We’ve been notifying shop owners since 2012, when we discussed the issue with related organizations and banned smoking in shops that were 150 square meters or larger,” said Ryu Si-ik, an official in charge of smoking policies at the Ministry of Health and Welfare.

Korea began to take action on cigarettes nearly 30 years ago. In 1986, tobacco manufacturers were mandated to put warnings on cigarette packs, and the government started to designate no-smoking areas in 1995.

Since then, the government has steadily expanded its no-smoking policy, supporting funds to help smokers quit.

Milestone changes have been implemented more recently. Smoking in restaurants, cafes and bars 150 square meters or larger was banned in 2012, and Internet cafes, also known as PC rooms, were designated no-smoking areas in June 2013.

The average price of cigarettes has also steadily increased, from 531 won per pack in 1990 to a little over 2,500 won as of 2011, according to the Health and Welfare Ministry. The largest leap comes this year in 2015, with cigarette costs jumping 2,000 won per pack to about 4,500 won total.

For non-smokers, who will no longer have to put up with the smell of smoke in public venues, the new policy is a relief, though there is concern that it may prompt more people to take their habit to the street.

“It seems that places where smokers can smoke are only decreasing,” said Baek Jong-hyeon, a 24-year-old university student in Dongdaemun District. “I’m afraid that we might see more smokers on campus in 2015.”

Shop owners who have only now been required to follow through with no-smoking policies are also worried about the side effects as smokers start drifting outside.

According to a survey conducted by the Korea Smokers’ Association (KSA) in June on 300 shop owners, respondents increasingly experienced problems last year that were related to the no-smoking policy applied to shops 100 square meters or larger.

In the survey, 62.3 percent of the respondents answered that they have had problems with cigarette butts being cast away at the entrance, up from 49.7 percent last year.

Likewise, proportion of the shop owners who complained about smoke permeating their stores rose to 44 percent, from 22.3 percent last year.

“If the government keeps pushing out smokers, they will not only find alternate places to smoke but also become more and more defiant against the policy,” said Shin Min-hyeong, the president of the KSA.

But despite concerns, the ministry is unlikely to tone down its actions and is trying instead to expand coverage further.

“We are planning to submit a bill that restricts smoking in small-size sports facilities like billiard rooms and indoor golf simulation clubs in the first half of 2015,” said Ryu, the ministry official.

Currently, smoking is banned in large sports facilities that can accommodate 1,000 or more people.

“We are prioritizing the rights of non-smokers ahead of smokers,” he added, indicating that the government was prepared to take a tough stance.

“And we are not planning on protecting smokers, but instead trying to assign more funding for facilities that help people quit smoking.”