The National Museum of Korea’s third-floor metalwork section underwent a two-month renovation in which its old lights and glass cases were replaced. Officials say that visitors can enjoy the intricate details of Korea's ancient art made of various metal with the new displays. Provided by the museum

The room is dim, but the artifacts from hundreds or thousands of years ago glitter.

The National Museum of Korea's metalwork section recently underwent a major face-lift. The space is home to some of Korea’s most famous treasures - like the 12th-century “Bronze Kundika with Silver-inlaid Willow and Waterfowl Design” (National Treasure No. 92), which appears regularly in domestic history textbooks.

The renovation, which took place over two months from last November, focused on two things: lighting and glass.

Museums these days are getting increasingly “smarter,” adopting the latest and hottest technologies. 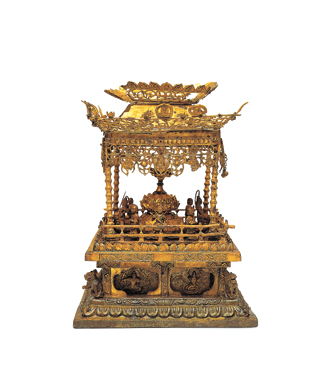 "Sarira Reliquaries from the East Pagoda of Gameunsa Temple Site" (National Treasure No. 1359) from the seventh century is one of the highlights in the national museum's metalwork section. Provided by the museum

Nonetheless, insiders say two traditional pieces of hardware - lights and glass - still remain the most crucial factors in determining what kind of experience a visitor has.

The museum in Yongsan District, central Seoul, was able to renovate its metalwork section thanks to patronage from Samsung Electronics. It signed a deal with Korea’s consumer technology giant last July, an agreement that said the company will provide 3 billion won ($2.8 million) until 2016 for the institution's renovation, with a focus on redoing its lighting.

Since director Kim Young-na, who has background in Western art, took the helm at the museum in 2011, she has worked to change the way items are displayed, among other improvements.

But for the museum, whose annual budget for purchasing artifacts has been frozen at a mere 2.88 billion won for the past five years, achieving this feat on its own has been a formidable task.

After all, the metalwork section's two-month upgrade cost 500 million won alone, according to insiders.

“We installed separate LED lights within glass cases so that people don’t miss out on the intricate details of the craftsmanship, which is what makes metalwork special,” Lee Yong-jin, the associate curator at the museum’s fine art department, told journalists during a press event on Jan. 20. “Also, we changed the glass cases to those with minimal reflectiveness.”

“We joke that you go there if you want to see your reflection, not the artifacts,” one museum official said.

The renovated metalwork section unfolds by material: relics made of gold, silver, bronze and metal are displayed in that order. Lee said most metalwork items were made of gold in ancient times and belonged to royalty, but as time progressed, materials became more diverse, and metalwork items could be found in common people’s everyday life. Their display order is chronological as a result.

Jeong Jin-a, a researcher at the museum’s fine art department, noted how they were able shed more light on metalwork that includes inlays - which require a keen eye to catch all the tiny details. There is a separate space for these artifacts.

“I personally think very highly of the inlays,” she said standing in front of a silver vase with inlays depicting willow trees. “The technique upgrades the aesthetics of an item, but at the same time it does not clash with the item’s practical side - which is something hard to do.”

This year, the section at the museum that is dedicated to Korea’s Goryeo Dynasty (918-1392), which is famous for its blue-green celadon pieces, will benefit from Samsung’s support. Officials confirmed that this year's renovation will take place at the section, which is situated on the first floor.