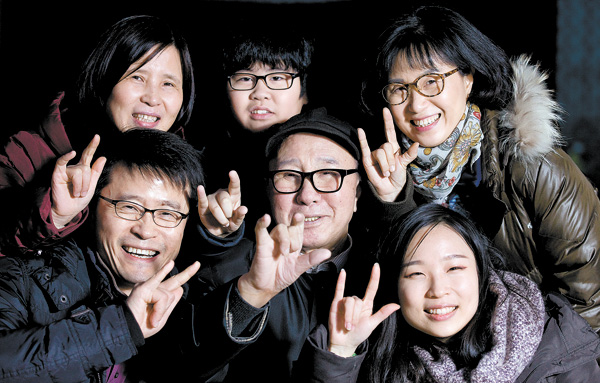 For Lee Bong-jin, 52, memories of his father center on his right hand.

“His hand was damaged,” says Lee, who runs a retail business. “But even so, he drew so well with it and even played a harmonica. I always respected him for providing everything my family needed.”

The story of the elder Lee resonates with others who fled North Korea before or during the 1950-53 Korean War and settled in the South, who overcame difficulties adapting to life in the South with no relatives or connections and remained determined to get ahead - the generation that is now dubbed the “Ode to My Father” generation after the hit movie that honors their pasts.

Lee Jae-myung, 82, came from South Hamgyong Province in 1950 and took care of his family by selling underwear in the Gwangjang traditional market in Seoul from the late 1950s through 1980s.

The middle and fourth finger on Lee’s right hand were fused together from a bad burn he suffered as a one-year-old. Despite the injury, he successfully settled in Seoul and raised son Bong-jin and two daughters.

Like many men who took responsibility for their families after the war, making ends meet for his wife and children was the No.1 priority, he recalls in an interview with the JoongAng Ilbo.

In gratitude for his father’s sacrifices, the son recently published a book, “A Family Life,” in which he chronicles his father’s devotion to his family in the South.

“As I looked into the past, I felt a great sense of devotion and love from not only my father but members of his generation,” said Lee Bong-jin. “There may be differences in opinion and thoughts among different generation due to their different experiences, but I think there is nothing more important than preserving family values.”

Bong-jin’s perspective on family is shared by many across his generation and beyond. In a survey of 1,370 adult men conducted by the JoongAng Ilo between Jan. 12 and 14, people in all age groups said the most important thing in their lives was their families.

While Koreans of all generations may agree on the importance of preserving family values, many still find it difficult to communicate with people in different age groups due to the vastly different experience they have had in their lifetimes.

Kim Hak-jae, a member of the age group known as the “386 generation” - Koreans born in the 1960s who went to university in the 1980s and came into their 30s in the 1990s, named after the Intel 386 microprocessor that was introduced in their youth - says 386ers find themselves sandwiched between two entirely different eras: that of their parents and children.

“I feel like I am at the center of conflicting values,” said Kim, 54, president of the private cultural institution Dasan Academy. “When my mother visits my home, I can’t go to the kitchen to help my wife. But when my mother’s not around, I have to wash dishes. At work, I can’t go home until my boss leaves first. But at the same time, I have to let my junior workers go home even when I am still at work [due to different perspectives on work and private life]. We are the sandwiched generation.”

In the same JoongAng Ilbo’s survey, 25 percent of those in the 386 generation said they find it hard to communicate with their parents’ generation on the issue of politics, while 21.1 percent said they found it difficult to discuss information and technology with them.

A similar pattern is found in people in their 20s and 30s. 17.9 percent of young respondents said it is difficult for them to talk to their fathers about information and technology, while 15.4 percent of them picked politics as the most challenging issue to discuss.

There is also big gap in each generation’s perspective on the other. Asked what image they associate with people in their 70s and 80s, almost half, or 46.4 percent, of the 386ers picked “sacrifice.” But most elderly respondents in the survey associate themselves with diligence and sincerity.

Another gap was found among people in their 20s and 30s and their parents’ generation, the 386 group. While 17.7 percent of the 386ers associate themselves with democracy, only 7.8 percent of the young generation agrees with such an assessment.

Analysts worry that a generational conflict between people in the 20s and the 386ers could widen due to ever-intensifying competition for jobs in the poor economy.

Young job hunters feel their career opportunities are being blocked by people in their 50s unwilling to yield their positions for the incoming workforce. For the 386 generation, leaving work prematurely means putting their entire family at risk because of the country’s weak retirement system and social safety net.

“The conflict between the two generations has developed into a complex one because it has different aspects that stem from fierce competition for jobs and the issue of who’s paying more to keep the national pension system afloat to meet the rising number of retirees,” said Ham In-hee, a professor of sociology at Ewha Womans University.