Exhibit to elevate pottery of laymen

Exhibit to elevate pottery of laymen 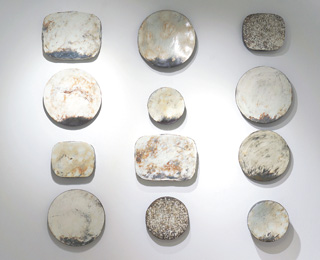 “The Sky” also by Lee. “Buncheong and Beyond” presents about 60 works by Lee Kang-hyo at the Crosspoint Craft Gallery in Yongsan District, central Seoul. Provided by Crosspoint

Korea’s buncheong sagi, or buncheong ceramics, are not as famous or as graceful as the blue-green celadon from Goryeo (918-1392) or the milky-white porcelain from the Joseon Dynasty (1392-1910).

After all, buncheong - known for its relatively rough silhouette, coarse surface and child-like drawings - were ceramics for the common people.

When buncheong was in fashion, which was during the first 200 years of Joseon, the royal families and aristocrats owned porcelain.

But commoners couldn’t afford this type of pottery, so they made buncheong instead, in an attempt to emulate it. 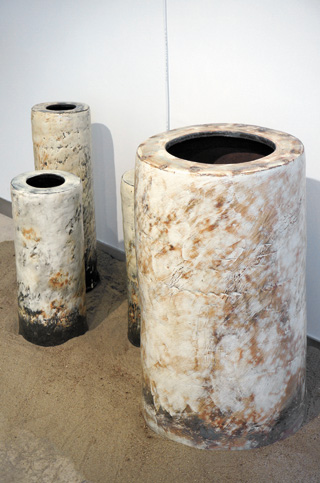 Buncheong is made of grayish-blue soil, but its surface is coated in white. In fact, the word buncheong sagi literally means “grayish-blue ceramic wearing white make-up.”

Sohn Hye-won, the creative director of design and marketing company Crosspoint, has chosen buncheong ceramics as the next muse for her recently opened museum.

The first floor of the museum, dubbed Crosspoint Craft Gallery, is dedicated to all kinds of traditional craftwork.

An exhibition on buncheong is currently under way at the gallery. Titled “Buncheong and Beyond,” the show presents about 60 works by Lee Kang-hyo, a ceramic artisan specializing in buncheong.

Lee recently held a solo exhibition, “A Beautiful Life,” in Goldmark Gallery in the United Kingdom.

“Lee makes his pieces using a traditional technique for making onggi [earthenware],” Sohn said. “The pieces are rich and deep because he uses five to six different-colored powders to complete a piece.”

Lee studied crafts at Hongik University’s prestigious art school. But after graduating, he moved to a village in Ulsan that specialized in making onggi to study the basics of the craft. For the past 35 years he has attempted to give traditional earthenware a modern spin with his sense of aesthetics.

“Some of Lee’s works are practical, but others are large installations,” the exhibit’s organizers said in a press release. “The depictions on the surface are rough. ... Sometimes he uses his palms, sometimes his fingers. His methods are spontaneous and random.”

Most of Lee’s pieces, however, have one thing in common: They are inspired by nature. His “The Sky” series, for instance, consists of 12 pottery pieces that decorate a white wall. The use of the artist’s favored powders are evident.

Another piece, “Buncheong Landscapes” lies more on the practical side. The seven ceramics all look different but are somewhat reminiscent of a moon-shaped jar. When turned upside down, however, they become ceramic benches.

Many of Lee’s works are part of the collections of renowned museums and galleries overseas, like the British Museum, the Victoria and Albert Museum, the Museum of Fine Arts, Boston and the Museum of Contemporary Art, Chicago.

Lee also took part in the “Constancy and Change in Korean Traditional Craft” exhibition that featured about 50 traditional Korean craft pieces by 16 artisans. It toured various countries such as Italy, the United Kingdom and China between 2013 and 2014. It was supported by Korea’s Culture Ministry and the Korea Craft and Design Foundation. Sohn was the exhibition’s artistic director, which was largely considered a success.