Portable Shrine with Buddha and Bodhisattvas

Portable Shrine with Buddha and Bodhisattvas 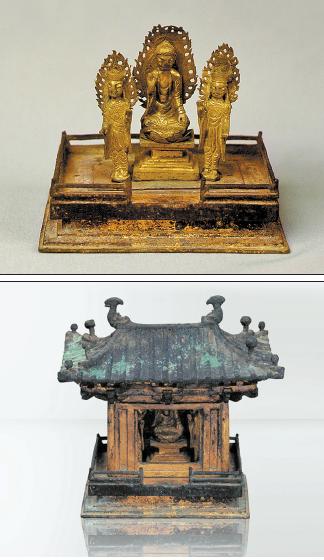 Many Buddhists carry a small statue of Buddha starting at a young age to protect them from evil spirits. The tiny Buddha is kept in a miniature shrine that resembles a Buddhist temple.

Today, historians use the figures to study the style of the Buddha placed inside as well as the architectural style of the period.

This shrine is 18 cm (7 inches) tall and is made of bronze and painted in gold, as is the small Buddha statue. Inside the shrine are an image of Buddha and two Bodhisattva statues standing on a rectangular platform.

There are large windows on the sides and front of the roof of the shrine, so the statue of Buddha can be seen clearly from the outside.

The long back of the Buddha, irregular pleats on his clothing and the Bodhisattvas’ crowns decorated with glass beads imply that the statue was produced between the 11th and 12th century, during the Goryeo Period, when Korean art was influenced by northern China.