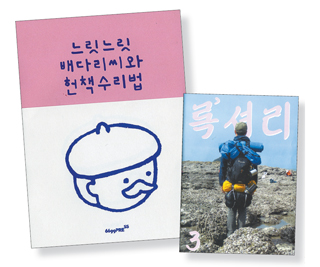 Books by independent publishers are doing what the mainstream industry isn’t. They include a book about fixing old books, left, and the Rock’lury magazine, which presents ways for people on a budget to enjoy the finer things in life. Provided by the library

They may be low-budget, but they also tend to be experimental and bold in the topics they cover and the way they address those subjects.

Case in point: 66100 Magazine. It is Korea’s first - and reportedly Asia’s second - fashion and culture magazine for plus-sized women and men. The number 66 refers to the size in Korean women’s fashion that is similar to a large size in U.S. womenswear, while 100 is the equivalent for men.

The National Library of Korea has arranged a special exhibition on the work of independent publishers. Titled “Public Library, Independent Publishing, Reading Room,” the show displays about 600 materials published independently in the areas of art, literature, photography, media and current affairs.

“Independent publishers emerged in Korea about six to seven years ago and are growing very quickly,” the library said in a press release. “Through unique voices and attitudes that cannot be found in mainstream publishing, they are making social progress.”

Besides the exhibition, there will also be discussions where independent publishers meet with audiences to share their experiences. The talks will be at 2 p.m. every Saturday in March.

Regardless of the intentions of the independent publishers, because they reflect social variety they deserve to be noticed, the library officials say. The publications are even more important given Korea’s tendency to exclusively respect mainstream culture and undervalue minority voices, they added.

The exhibition of independent publications is the latest attempt by the National Library to show its respect for creativity, according to the library’s publicist Jo Su-yeon. From May to August last year, the library held a show on Korean webtoons, cartoons that are read online, usually on smart devices.