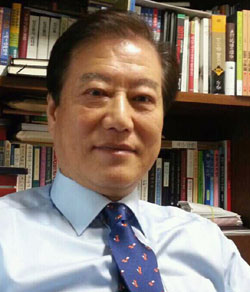 And the man responsible for bringing this facility to the area was Lee Jin-hak, 68, who heads the airpower development institute - a organization that has no official English name.

“It is the first time for Boeing to build an MRO center overseas,” Lee confirmed.

At the facility, electronic components for aircraft like the F-15K, one of the nation’s core strikers, are repaired. Before the center opened, it sometimes took three years for a broken F-15K part to be fixed, and those components were most always sent to the United States.

Lee was a jet pilot before coming to the institute, as well as chief negotiator for the Korean government when it bought the F-15 fleet from Boeing.

At the time, the country bought some trillions of won worth of weapons, which included Apache helicopters. In 2012, when the central government was planning a maintenance contract for the F-15 Ks, Boeing gladly responded, establishing an MRO in Korea.

Then, Lee worked as an adviser for the North Gyeongsang Provincial Government’s avionics business and suggested to Boeing that the MRO center be built in Yeongcheon, citing that it was a 20-minute drive from the K2 Airbase in Daegu, where there are 60 F-15K units.

Boeing opted to make a $20 million investment, which included opening the MRO center, in 2013, before President Park Geun-hye visited the United States.

Before the decision, the Korean government considered purchasing 60 additional fighter jets as part of its third FX project, with Boeing as one of its candidates.

However, the result wasn’t ideal for Boeing - the Korean government eventually formalized its selection of Lockheed Martin’s F-35s for its fighter acquisition program. Still, Boeing kept its word.

The North Gyeongsang Provincial Government and the Yeongcheon City Government are currently working to develop an aviation technology valley (ATV) to house a test center for aviation parts and its research centers by attracting domestic and overseas business.