Chung will face his former party in by-elections

Chung will face his former party in by-elections 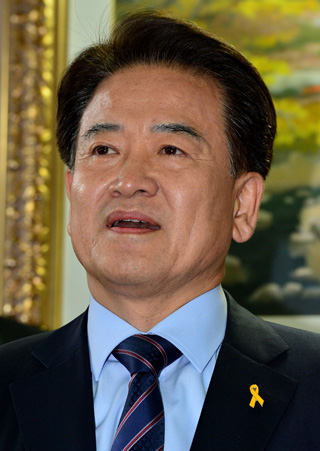 Chung Dong-young, who ran for president as an opposition candidate in 2007, declared that he will run for by-elections next month. He will face off against a candidate for the New Politics Alliance for Democracy (NPAD), which helped him nurture his political career for more than a decade.

Chung, who was defeated by former President Lee Myung-bak in the 2007 election in a landslide, said Monday he has decided to run for the Gwanak-B district race as an independent candidate in the April 29 by-elections to bring about sweeping change to the opposition bloc.

“The race for Gwanak-B district is a battle between the political establishment that is content with the status quo and the people who long for change,” said Chung, who also served as unification minister during the Roh Moo-hyun government. “I will devote myself as an instrument for political reform.”

While Chung has defined his race as a new political force against the conventional group, his decision to run has angered many within the NPAD, who are going so far as to call his actions “deplorable” and say that it will create factions in the opposition party.

A sense of betrayal was particularly felt by members who helped eight years ago when he ran for president of the former United New Democratic Party, the NPAD’s precursor.

The journalist-turned-politician left the NPAD last December protesting that it had gone too far right on the ideological spectrum and formed a political group named People’s Group, which critics believe is Chung’s preparation for launching his own party. In the past he has demanded the NPAD embrace more liberal ideas and has criticized it for only following in the footsteps of the ruling party.

But Chung’s political group has had trouble recruiting new faces to contend with the two mainstream parties for the four constituencies open in the upcoming by-elections. It has been said that Chung had no choice but to run for Gwanak-B district himself.

Rep. Kim Yung-rok of the NPAD said Chung’s decision was deeply deplorable and illogical as it would only create factions in the opposition party. The NPAD is worried that Chung will split the votes for its Gwanak constituency candidate and in turn bring a surprise election victory for a Saenuri candidate. Gwanak-B district has been a traditional stronghold for the opposition because of its largely young constituency.

Regarding criticism that his actions will only split the votes for the opposition, Chung said Monday his move was intended to bring about innovation to the NPAD.