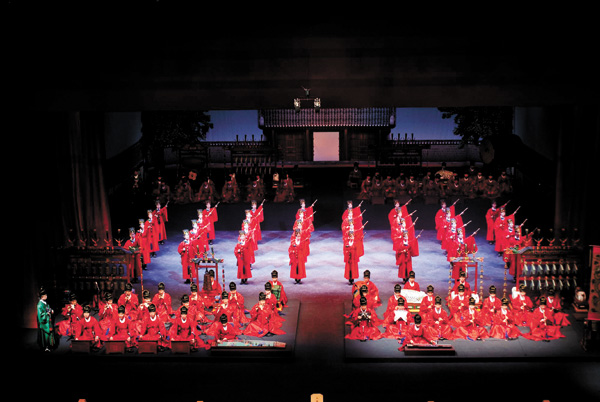 “The Sky of Daehan” performance, set to be held from April 16 to 18 at the National Gugak Center, reenacts the 1897 ceremony marking the Joseon Dynasty’s rebirth as the Daehan Empire. Provided by the center

People tend to make extreme decisions when they think it can’t get any worse, which was certainly the case for King Gojong (1852-1919) from Korea’s former Joseon Dynasty (1392-1910) near the end of his reign.

Japan had assassinated the king’s wife, the pro-Russia Queen Myeongseong (1851-1895), and he was under increasing pressure from the island nation to annex Joseon.

His life was also at risk, to the point where he took refuge in the Russian legation in Seoul a year after the queen’s death - a move often picked as one of the country’s most shameful historical moments.

The king declared in 1897 that Joseon would no longer be a kingdom. He announced it would instead assume a new identity: the Daehan Empire (also known as the Korean Empire) and that it would rub shoulders with other imperial states, such as China and Japan.

Although it is not the case in the West, in Northeast Asian history there was a clear distinction between an empire and a kingdom, and an emperor and a king. 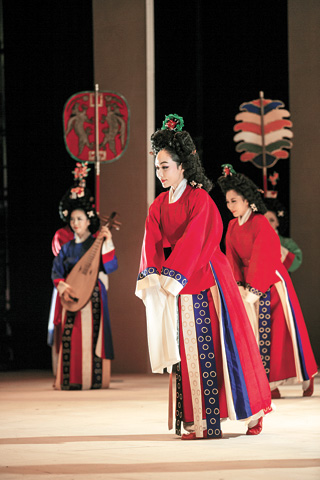 Although the performance is based on historical records, officials are also allowing room for creativity. Provided by the center

The Joseon Dynasty was a kingdom, but China was an empire, and a kingdom was often considered a vassal state of an empire. Until the early 20th century, Joseon was loosely under China’s power as a result.

The outfits for an emperor and a king also differed, and so did many other protocols.

On his return to Deoksu Palace from the Russian legation in 1897, Gojong took preparatory steps to declare Joseon as the Daehan Empire.

In October that year, there was an official ceremony to mark the change - including a ritual dedicated to the sky - at the Hwangudan complex across from the main gate of the palace, which is where the Westin Chosun Hotel is currently located.

Diplomatic circles, according to historians, scoffed at the idea, as Joseon was clearly waning. As a result, the ceremony in which Gojong declared the start of the short-lived Daehan Empire (1897-1910), was - and still is - a rather emotional and bitter moment for Koreans.

The National Gugak Center announced on Tuesday that it will be reenacting part of the ceremony based on the historical Uigwe books that detail the protocols for Joseon Dynasty ceremonies and rites (registered on Unesco World Heritage List) as well as other historical documents.

Putting the pieces together


Titled “The Sky of Daehan,” the performance will be held from April 16 to 18 at the center located in Seocho-dong, southern Seoul.

Minor parts of the ceremony were reenacted in 2003 by the Cultural Heritage Administration at Gyeongbok Palace, and then again in 2008 and 2009 by the Seoul Metropolitan Government at Unhyeon Palace.

But “The Sky of Daehan” is larger in scale. A lot of work has gone into historical verification as well as theatrical perfection.

“For the first time, palilmu [a group dance of eight rows by eight columns] was presented,” Jeong Jae-guk, an art director at the National Gugak Center, told reporters.

“It will be a large-scale musical play .?.?. and people will be able to enjoy all three genres of court music,” referring to yeonneak (celebratory music), jeryeak (music for ancestral rituals) and gunnyeak (military music).

According to Song Ji-won, a researcher at the center, because the declaration took place during the official state mourning period for the queen, which was three years at that time, music was not played during most of the ceremonial rituals.

However, musical instruments were placed at the scene to mark the occasion.

“The Uigwe documents a total of 23 ceremonial rituals for the declaration of Daehan Empire,” she said. “But music was played in only two of the 23 rituals.”

But the center decided that the performance would be more than just a reenactment and allowed room for adjustment.

“The Sky of Daehan” will recreate five rituals. But in fact, only four are from Uigwe.

One ritual, where the new emperor greets foreign envoys, is not recorded in the historical book, but officials said they decided to add it based on other historical records.

In this ritual, foreign actors will appear on stage. Additionally, although the two rituals that the center would be reenacting didn’t have background music, officials decided to allow some to be played anyway.

About 150 of the center’s performers will go onstage sporting the colorful imperial costumes of the time as well as some important musical relics that are in the possession of the National Gugak Center. 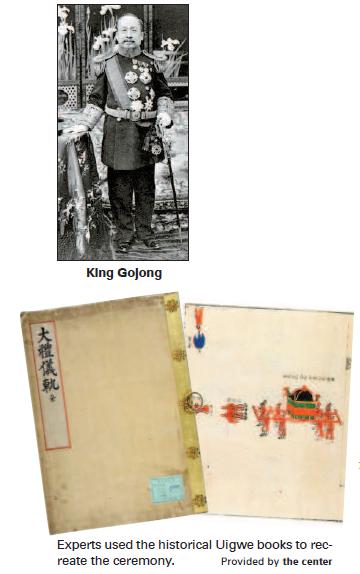 “We hope to portray a different side of Gojong, a facet of him that we didn’t really know before,” Nam Dong-hun, the show’s director said. “I enjoyed the creation aspect much more than the reenactment part, though,” he laughed, while referring to the painstaking process of historical verification.

Experts at the center have so far recovered more than 50 royal dance moves based on historical documents. Today, the center is equally focused on modernizing and adding a contemporary twist to the Joseon choreography so that Koreans today can enjoy it even more.

“The Sky of Daehan” will take place from April 16 to 18 at the National Gugak Center. Performances during weekdays will start at 8 p.m. while shows on the weekends will begin at 3 p.m.