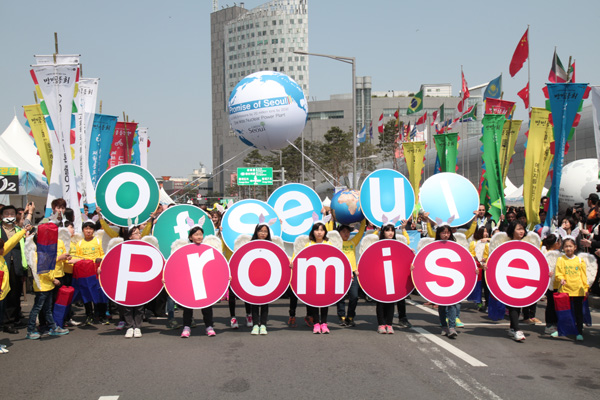 Children hold signs that spell out “Promise of Seoul,” referring to the city government’s plan to reduce its greenhouse gas emissions, on Sunday on the road in front of the Dongdaemun Design Plaza, central Seoul, in celebration of the International Council for Local Environmental Initiatives’ five-day congress. [NEWSIS]

The International Council for Local Environmental Initiatives (Iclei), a global association of local governments and organizations committed to sustainable development, concluded its largest-ever congress in Seoul on Sunday.

The five-day event held mainly at the Dongdaemun Design Plaza (DDP), central Seoul, had the most mayors and representatives of 204 member cities and regional governments as well as officials from 190 organizations from all over the world. From Korea, 36 cities, including Seoul, Suwon and Changwon, took part.

The congress also said it had more than 127,000 visitors to plenary sessions and exhibitions set up at the DDP and Seoul Square in the center of Korea’s capital city.

The most valuable legacy of the Iclei World Congress 2015 was the adoption of the Seoul Declaration.

“We adopted the Seoul Declaration, which underlines the priorities for our common goal of building a sustainable city,” said Seoul Mayor Park Won-soon, who is also the incoming president of the Iclei. “We have vowed our commitment to cooperate among cities to reduce greenhouse gas emissions, and agreed to hold a mayoral forum on annual bases as an extension of the Compact of Mayors.”

The priorities mentioned by Park are reducing greenhouse gas emissions and creating a low-carbon city; a resilient city; a resource efficient and productive city; an eco-mobile city; a smart city; a biodiverse city; a happy, healthy and inclusive city; a sustainable local economy and public procurement; and a sustainable city-region cooperation.

Thirty-six leading mayors announced their intent to comply with the new Compact of Mayors - a global coalition of mayors and city leaders voluntarily making a commitment to cut greenhouse gas emissions, track progress and prepare for the impact of climate change.

The Seoul Strategic Plan 2015-21 was also adopted, which presents a continuation of the Iclei’s previous plans and also focuses on new strategic initiatives for the next six years.

These consequences of the congress will be delivered to leaders of all the member countries at the 21st session of the Conference of the Parties to the UN Framework Convention on Climate Change, a landmark event that will determine the post-2020 climate regime.

“The Seoul Declaration would be a good case that will lead to actual goals, plans and executions at the Conference of the Parties to the UN Framework Convention on Climate Change in Paris in November,” said Ahmed Djoghlaf, Co-Chair, Ad Hoc Working Group on the Durban Platform for Enhanced Action. “While Seoul is acting as the president city of the Iclei, I’ll work to deliver the commitment of cities to the conference in Paris.”

Seoul Mayor Park was also elected as the new president of the association on the first day of the congress, the first person from Asia to be chosen for the position, and will be leading the council for the next three years.

Park also later said in a statement, “The achievements of the congress will be a stepping-stone to represent efforts and voices of cities and local governments.”