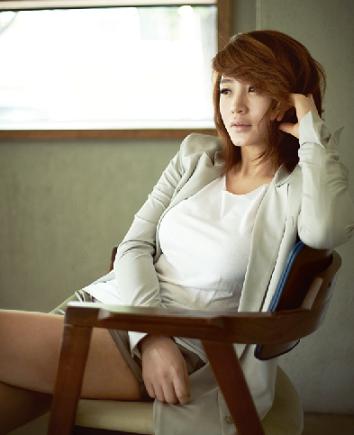 In “Coin Locker Girl,” actress Kim Hye-soo shows off neither her flawless skin nor voluptuous figure - two features she is famous for.

Kim plays a mob boss based in Incheon’s China Town who goes by the name Eomma, which means “mother” in Korean. She makes a living from loan sharking and organ trafficking and looks almost demonic in the movie, with freckles all over her face and white, bushy hair. Her figure is large and she tends to sit with her legs spread wide in a masculine way.

“We intentionally excluded any feminine elements and attempted to deliver a character so demonic that gender just doesn’t matter,” the actress explained.

She added that she turned down the role several times because she felt that Eomma was too much of a villain and that the film in general was too dark.

Ilgan Sports, a Korea JoongAng Daily affiliate, met with the actress to talk about the film and more.

Q. What eventually made you decide to take on the role?

A. I was extremely shocked when I first read the script. I thought it would be such an emotional burden, mostly because of the weight of the emotion that the film was attempting to deliver. That’s why I rejected it initially.

But [the director] later said the script had been revised and asked me to review it. So I did, as reviewing is not too difficult, and the final script really captivated me.

I was particularly fascinated by the fact that women were not in the periphery of power but at the core of it. I think any actress would’ve been attracted to this. My confidence increased as I prepared for the role.

What was your interpretation of Eomma?

She is China Town and survival itself. She’s an immigrant with no roots or connections here. Even before she found her identity she had to fight to survive. That’s why she’s absolutely merciless in killing others for her own survival.

For someone whose whole life was about survival, there is just no room for femininity. I’m more of a person who is very much a woman, so I intentionally wanted to exclude that from Eomma. I attempted to deliver a character so demonic that gender just doesn’t matter.

Also even if she’s 40, we wanted to make her look 60, aged due to living such a fierce life.

What’s Eomma’s relation with Il-yeong, played by Kim Go-eun, and what was it like to work with her?

Eomma knows instantly when she first sees Il-yeong that she will take up her position. She says to Il-yeong, when she dies, “Don’t die until you die.” She is telling Il-yeong not to get killed by others and hang in there and survive until she chooses to die herself.

I try not to be too conscious of who I’m working with. But it was lucky of me to work with such a good actress as her. I got a lot of good vibes from her and cherish the experience. She is a good actress and I have high expectations for her.

Would you take on a role like this again?

I doubt that I will meet another Eomma. That’s one of the reasons that I accepted the role. I think it will be hard for us to see a role like this again in the future. There can be a female boss in a noir film, but not like “Coin Locker Girl.”

What was it like working with a less-experienced director?

I don’t really care when I’m working about the director’s past experiences. In fact, not once when I was filming “Coin Locker Girl” did I think this was Han’s first feature film. She was very calm and stable, and never missed what’s important.

What’s most important to you then, when you choose your work?

The script is the most important - what contributions I will be making in delivering the film’s theme with the character given to me. Most importantly, I ask myself, “Can I really understand this piece? And can I really deliver the theme?” If my answers are no, I can’t take on the job no matter how fun it sounds.

What intrigues or motivates you?

A lot of things, actually. It can be people, it can be phrases, music or films. I get interested in a lot of things and motivated by many things, too, which I think is good for you.

We can’t finish the interview without asking your plans for marriage or a family.

I am not celibate, I can say that. When I really want to get married I will. I don’t put marriage on hold because of work. I just think that although it seems stable to live in a framework defined by the society, that framework isn’t made for me, and it won’t always be the right answer.