Left: One of the highlights at this year’s Chunhyang Festival is the new stage with the scenic Gwanghallu Pavilion as its backdrop. Top right: As usual, a beauty pageant to find the year’s Miss Chunhyang will take place. Bottom right: There will also be a gugak (traditional music) competition, as has been the custom for many years. Provided by the organizer

Most traditional ancestral rituals in Korea revolve around men.

But there are two notable ceremonies that are exclusively for women.

One is the rite for Seong Chun-hyang, a fictional character from the famous Joseon Dynasty (1391-1910) love story. The other is for Nongae (unknown-1593), a female entertainer from the same period who is just as famous as Seong.

The shrine for Seong, better known in Korea as Chun-hyang, is in Namwon, North Jeolla, the setting of the novel “Chunhyangjeon.” Nongae’s is in Jangsu, also in North Jeolla. 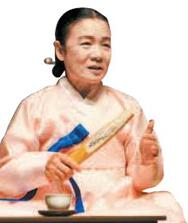 An Sook-sun, the chairwoman of the Chunhyang Festival Executive Office.

Come next week, the ritual for Chun-hyang will take place. The May 25 celebration is part of the large festivities dedicated to Chun-hyang and the setting of the love story, Namwon, which today is a scenic and rather quiet city of just 80,000 residents.

The Chunhyang Festival, now in its 85th year, kicks off its four-day run on May 22 in various locations in Namwon, including the Gwanghallu Pavilion, which is where the two young lovebirds Chun-hyang and Lee Mong-nyong met and fell in love at first sight, according to the story.

“The festival is about celebrating nature and humanity, and of course love, Chun-hyang’s love, which is also what Namwon is all about,” she said. “Namwon is a beautiful city, close to Mount Jiri and the Seomjin River. People will realize why Chunhyang Festival is different from other festivals when they come.”

An is the artistic director of the National Gugak Center and a professor of traditional arts at Korea National University of Arts. The 66-year-old has also been honored as an Important Intangible Cultural Heritage No. 23, recognized by the country as a person who possesses the traditional skill of playing the gayageum (traditional zither) both solo and in orchestra performances.

Besides being a Namwon native, the region and the festival have a special meaning to An. In 1986, the artist won the presidential award at the Chunhyang Gugak Contest, part of the festival’s program, which catapulted her to stardom and where she is now.

In fact, for a long time the Chunhyang Festival has been considered a gateway to becoming a star gugak artisan.

The story of Chun-hyang is equally famous as a novel and a pansori, or a traditional narrative singing performance. Most older Koreans can hum the love song from the pansori Chunhyangga.

During this year’s festival, the Chunhyang Gugak Contest will be held outdoors and is open to the public in an effort to enhance transparency and fairness. The sections of the contest, including pansori, minyo (folk song) and dance, will take place throughout the festival’s four-day run.

The story of “Chunhyangjeon” is very close to a Prince Charming who rescues the damsel in distress.

In the story, a boy named Lee Mong-nyong, the son of a Namwon official, meets Seong Chun-hyang, a daughter of a gisaeng (a female courtesan) in Namwon, North Jeolla. The two fall in love, but Lee leaves Chun-hyang because his father relocates to Seoul. A villainous Namwon official notices Chun-hyang’s beauty and demands she have sex with him but Chun-hyang refuses. She is tortured as a result but does not change her mind due to her love and loyalty for Lee.

Meanwhile, Lee passes the state examination in Seoul and comes back to Namwon as an undercover royal investigator. He discovers that the official is corrupt and rescues Chun-hyang.

In contrast to the story, the Chunhyang Festival champions women.

It is one of the few festivals in Korea where the chairman of the event’s executive office is female, according to Kwag Ju-young, a festival planner at Namwon city.

The ancestral ritual for Chun-hyang, conducted by women only, receives applications from those who wish to participate, and as it happens every year many apply, Kwag said.

There is also a beauty pageant, which has for many years been one of the highlights of the festival. Some of Korea’s famous actresses, including Lee Da-hey and Yoon So-na, won the pageant before becoming major stars.

The beauty pageant will take place on May 25 this year.

Hoping for a new era

The organizers are hoping that this year will mark a new era for the festival.

For starters, it has created a new stage in front of Gwanghallu Pavilion, state-designated Treasure No. 281. The stage uses the pavilion as the backdrop, making the most of the beauty of the 17th-century structure. They also worked hard on installing lights in the area, as they have organized many of the programs at night.

Also, in hopes of becoming an internationally-recognized festival, the organizers have also invited performance groups from Italy, Russia and China, whose shows will take place between May 22 and 25.

Organizers have also adopted a fixed-rate system at the food market to root out any rip-off prices, which have previously been rather prevalent.

“In the past, the festival was more of a local thing, but we hope to take steps to becoming an internationally recognized, cultural celebration,” Kwag of Namwon City said.

Although it has long been believed that the lovebirds were fictional characters, new claims surfaced last year that Lee could have been based on a real person.

A descendant of the Joseon-era aristocrat Seong Yi-seong (1595-1664) donated about 700 artifacts related to Seong to the Korean Studies Advancement Center. The descendant, Seong Ki-ho, thinks the aristocrat was a real-life model for Lee’s character.

Korean academics are looking into such a possibility.

The author and publication date of “Chunhyangjeon” are unknown, but historians presume the novel was penned sometime in the 18th century.