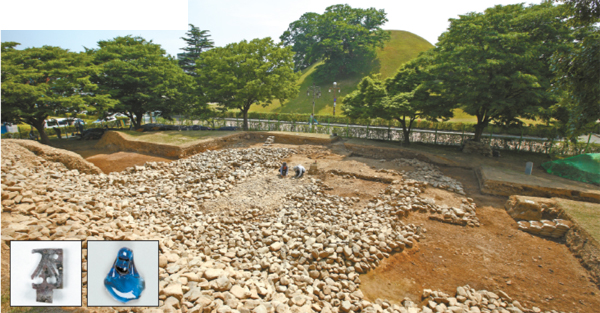 Exquisite gold crowns from Korea’s Silla Dynasty (57 B.C. to A.D. 935) are undoubtedly some of the country’s most representative ancient relics.

But the first Koreans to discover the crowns were not professional archaeologists - they were everyday people being forced to dig.

During Japanese colonization in 1921, residents of Gyeongju, North Gyeongsang, came across gold jewelry while expanding their property. Gyeongju served as Silla’s capital for almost 1,000 years, and it turned out the residents’ land housed an ancient tomb.

The Japanese Government-General of Korea brought workers - teachers and police officers, but no professional archaeologists - to the tomb, known today as the “Geumgwanchong Tomb,” and forced them to unearth hundreds of precious artifacts in just four days.

Among the artifacts is “Gold Crown from Geumgwanchong Tomb,” Korea’s National Treasure No. 87, the first gold crown to be discovered by contemporary Koreans.

The Korean archaeological community has long considered the 1921 excavation to have been poorly conducted by the Japanese and that there might have been things they missed.

As this year marks the 70th anniversary since Korea’s liberation from Japan, the National Museum of Korea conducted a special archaeological exploration of the tomb between February and this month.

Korean archaeologists, according to the National Museum of Korea last Tuesday, finally figured out how the tomb was constructed, as well as its size and shape. The archeologists also unearthed relics like a fragment of a cobalt-colored glassware and an accessory to a silver belt.

Still, they were not able to discover who the temple belonged to - something that has been, and remains, a mystery. 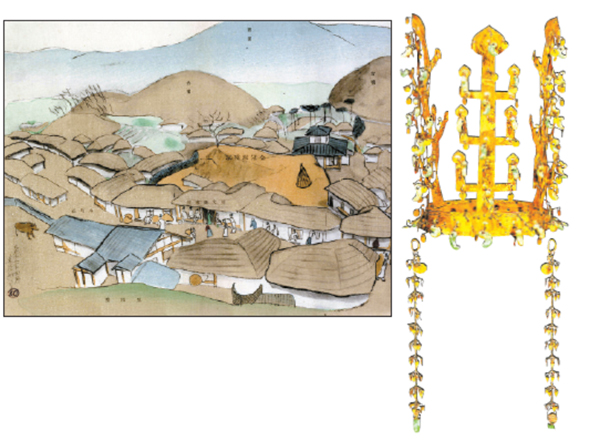 Researchers of the National Museum of Korea and Gyeongju National Museum found out that the tomb was constructed between the late fifth and early sixth century, and was as large as the Cheonmachong Tomb, which measures 47 meters (154 feet) in diameter. They also learned its shape was closer to a square than a circle.

The tomb’s structure is typical of those used by Silla’s ruling class, they said. Instead of being buried alongside their items underground, Silla aristocracy were placed in a wooden box on the ground. Another wooden box would be placed around it, followed by a layer of stones and a final layer of soil.

The biggest finding, researchers say, was signs of a wooden framework between the stones. A similar structure was discovered at Hwangnamdaechong Tomb, but it received little academic attention. Researchers said they are still unclear about the purpose of the frames.

Glass from the Roman Empire

Because the Japanese uncovered most of the relics 94 years ago, Korean archaeologists did not expect to secure many artifacts

But they did find a fragment of cobalt-colored glassware, an accessory to a silver belt and gold threads with decorations.

Lee Han-sang, a history professor at Daejeon University, told the Chosun Ilbo that “glass in an ancient society was [as precious as] gold,” adding that it appears to have been imported from the eastern part of the Roman Empire.

But no relic indicating the tomb’s ownership was unearthed. Researchers hoped that this round of excavations would answer questions raised in 2013, when the National Museum of Korea identified letters “King Yisaji” on a sword from the tomb.

The discovery triggered heated debate about who King Yisaji was - there is no mention of him in existing Silla records - and if the tomb really belonged to him or not.

Start of something big

According to sources, the museum and the Cultural Heritage Administration will push to restore the Geumgwanchong Tomb, although details have yet to be officially announced.

Should the study and restoration of Geumgwanchong Tomb be deemed a success, more such activities could take place at other tombs excavated during Japanese colonization.

“The Geumgwanchong excavation was done by non-professionals and it’s incomplete,” Kim Young-na, the director of the National Museum of Korea told journalists earlier this year, while unveiling its plans to excavate the tomb.

Kim added the tomb’s successful excavation could lead to a revisiting of other archeological sites excavated during the colonial period.