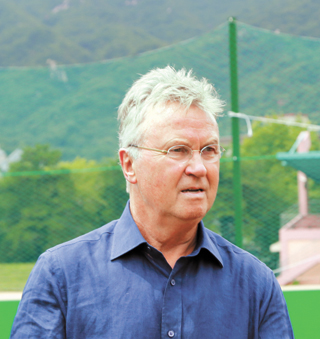 THE HAGUE, Netherlands - The Dutch football federation, also known as the KNVB, terminated the contract of national team coach Guus Hiddink on Monday, ending his second stint after just one disappointing season.

The KNVB said that Hiddink’s contract will now end on Wednesday. It had been set to last through next year’s European Championship.

Hiddink took over after Louis van Gaal led the Netherlands to third place at last year’s World Cup, but the Netherlands have had a poor qualifying campaign for Euro 2016 so far. It sits third in Group A, behind leader Iceland and the Czech Republic.

“It’s a shame that it went this way,” Hiddink said in a statement released by the KNVB. “It was an honor to coach the Netherlands team again and I wish my successor, the staff and the squad every success on their way to the European Championship in France.”

“Sadly, the results of Guus’ work were not immediately visible to everybody,” he said.

Hiddink’s assistant, Danny Blind, was set to replace him after Euro 2016, but was not immediately named to take over Monday. Instead, the KNVB said it was considering how to fill the vacancy left by Hiddink’s early exit.

Hiddink, who led the Netherlands to the semifinals of the 1998 World Cup in France during his first stint as national coach, never managed to build on the success of Van Gaal’s World Cup campaign and left the job with a record of five losses, four victories and a draw.

Monday’s announcement marked one of the lowest points in the 68-year-old Hiddink’s storied international coaching career. After taking the Netherlands to the semifinals in France, he repeated the feat with unfancied South Korea in 2002 when the country co-hosted the tournament with Japan.

Hiddink is still revered in South Korea, where statues of him were built after the 2002 World Cup and where he was named an honorary citizen of the capital, Seoul.

He continued his run of international success by leading Australia in 2006 to only its second qualification for the World Cup. Australia lost in the round of 16 to Italy, which went on to win the tournament.

He also guided Russia to the European Championship semifinal in 2008, coached Turkey’s national team and won the European Cup with PSV Eindhoven in 1988.

But he seemed to have lost the knack for bringing the best out of teams in his second term at the helm of his home country’s national team.

His last match was a 2-0 victory over Latvia this month that came days after the United States rallied to beat the Dutch 4-3 in a friendly in Amsterdam.

That result again exposed frailties in the Dutch defense that Hiddink, unlike his predecessor Van Gaal, failed to successfully patch up.