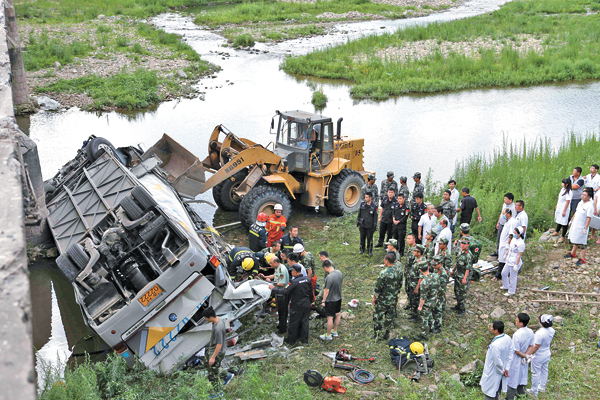 A bus carrying Korean tourists fell off a bridge in Jian city in northeast China’s Jilin province on Wednesday, killing 10 Koreans as well as their Chinese driver, the local government said.[XINHUA/NEWSIS]

A bus carrying Korean government officials on a leadership training program in China skidded off a bridge and into a river Wednesday in southeastern Jilin province, leading to 11 deaths.

Many of those killed were municipal and provincial officials in their 50s who spent their careers dedicated to civil service and were just several years away from retirement.

The bus, carrying 27 people, crashed through a bridge railing in the county of Jian, and plunged into a river around 15 meters (49 feet) below around 3:30 p.m. local time Wednesday.

The Ministry of Foreign Affairs and Ministry of Government Administration and Home Affairs confirmed Thursday that 10 Koreans were killed in the accident along with the Chinese bus driver. 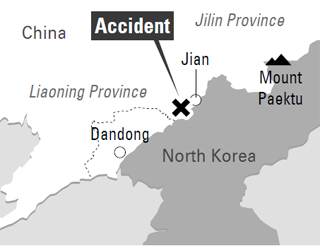 At least five other Koreans are seriously injured. The passengers who survived the fall are getting treatment in a local hospital.

The civil servants were participating in a training program organized by the state-run Local Government Officials Development Institute based in North Jeolla. The training institute is affiliated with the Home Affairs Ministry and has held leadership training programs for government officials over Grade 5 annually since 2012.

This year, 148 government officials, several months into the leadership program, participated in the five-day trip to China, taking them to Yanji, Dandong and Dalian. The trip kicked off Monday and was supposed to wrap up Friday.

The officials were being transported in six buses from Jian toward Dandong in Liaoning province, near the border with North Korea, when the fifth bus veered off the bridge.

There were 24 Korean officials on that bus, an employee of the development institute, a China-based Korean guide and a local driver.

They were from major cities including Busan, Incheon, Gwangju and Seoul, and provinces including Gangwon, Gyeonggi and Jeju.

Seo Sang-gil, an official from the North Gyeongsang Provincial Government, who was riding in the fourth bus, said in a phone interview with the JoongAng Ilbo after the accident, “The bus I was riding in halted suddenly. When we heard there had been an accident, we got off our bus and realized that the bus following behind us, the fifth one, had fallen over the bridge, and turned over.”

The cause of the accident had not been confirmed by Chinese authorities.

However, an official of the institute said the driver might have dozed off while driving, taking into consideration that there were six buses driving in a row along the same winding road, when the fifth suddenly veered off course.

Minister of Government Administration and Home Affairs Chong Jong-sup issued an apology Thursday morning in a briefing, sending condolences to the relatives of the dead.

“I offer a sincere apology for this accident that happened in the middle of a training program,” he said.

Chong added that the government formed an emergency response team immediately after the accident, and an official from the Korean consulate in Shenyang was dispatched to the scene of the crash. Likewise, a response team of Home Affairs Ministry officials departed for China Thursday morning.

“We will cooperate closely with the Foreign Ministry to support the families of the victims and put our utmost effort toward the treatment of those injured and recovering from this accident,” the minister added.

There also was an outpouring of support from local governments for the victims’ families.

Jo Yeong-pil, a 54-year-old Jeju Provincial Government official, was one of the victims. Jeju Gov. Won Hee-ryong expressed “deep condolences” to his relatives and sent four officials to accompany Jo’s wife and children, who flew to Shenyang Thursday.

The Goyang City Government in Gyeonggi, home to one official who died and one who is injured, announced that it is sending three municipal officials to China to help respond to the accident.

Relatives of the fatality from Goyang, Han Sung-woon, a 54-year-old official of the city government, were to set to depart for China.

Many lamented the loss of government officials who left their marks on the cities, provinces and communities they worked for.

Kim Tae-hong, a 55-year-old official with the Busan City Government, was a model civil servant who over the years received numerous awards including the Public Administration Minister’s award in 2011 and a presidential citation in 2012.

Kim was especially remembered for volunteer activities and for the past seven years preparing and serving meals for seniors who live alone.

Hong Gil-ja, 77, head of the seniors at the Gongchang Social Welfare Center in Busan where Kim volunteered, told the JoongAng Ilbo on Thursday, “I am resentful of the gods.”