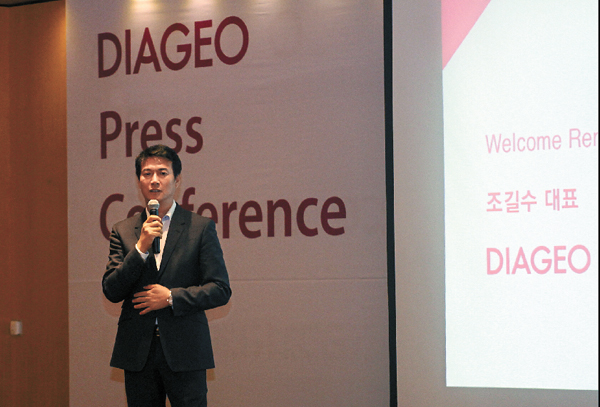 Diageo Korea’s CEO Cho Kil-soo announces the expansion of its low-alcohol content Winsor W Ice market to Jeju on Saturday at the Hyatt Regency Hotel in the island province. Provided by the company

JEJU - Dressed in a fashionable dark business suit, Cho Kil-soo, CEO of Diageo Korea, walked on stage at a conference room in the Hyatt Regency Hotel on Saturday and proudly announced the launch of his company’s low-alcohol spirits, Windsor W Ice, into the southern island’s market.

Jeju is an attraction not only for Korean summer vacationers but in recent years also for Chinese tourists.

“There seems to be a lot of opinion that the whiskey market is in recession, but from my perspective it seems there is still a desire for whiskey,” said Cho. “I believe the whiskey market will hold its ground if we read the market properly. “In particular, female consumers and younger consumers are very different from our older consumers.”

The new low-alcohol spirits has an alcohol content of 35 percent, which is lower than the standard for Scotch whiskey of 40 percent. The company’s expansion into the Jeju market, comes at the heel of a huge success W Ice has seen in Busan and South Gyeongsang since March. The southern regions of the peninsula were the first markets for the new product in Korea. South Gyeongsang and Busan have become the test bed for new beverages with lower alcoholic content because demand for such drinks there in recent years has been stronger than in other regions.

The Korean operations of the global liquor company, which is based in Britain, said the popularity of W Ice had exceeded the company’s initial expectations.

“Orders exceeded inventory so we had to fly more in because it would take roughly three months if it were sent by ship,” said Han Sang-wook, commercial strategy director at Diageo Korea. In the first month, the company sold 100,000 bottles of W Ice and other estimates say that in succeeding months sales have reached 350,000 to 400,000 bottles.

The company said it has seen a reorder rate for the new spirits of 80 percent at the 3,000 bars and other entertainment businesses in Busan and South Gyeongsang where Diageo Korea supplies W Ice. That customer satisfaction is running far ahead of the usual 40-50 percent rate at which businesses usually decide to keep a new whiskey on hand after a test run.

The popularity of W Ice and Diageo Korea’s decision to expand its supply to Jeju comes as the local alcohol beverage market undergoes a major change and competition has been heating up.

The popularity of reduced-alcohol beverages has become a major trend and has changed the landscape of Korea’s infamous drinking culture. 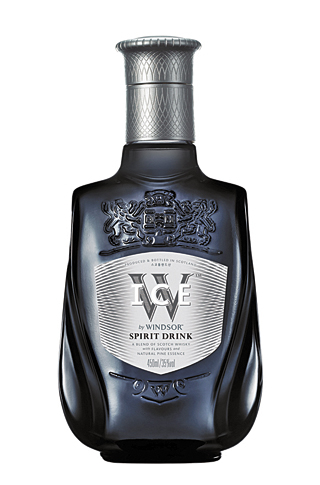 Diageo Korea said it had been aware of the growing success of “light” drinks that was occurring across the entire alcoholic beverage market but particularly in the nation’s alcohol staple, soju.

The heated competition among soju manufacturers isn’t new - even in the 1990s there were some soju brands with 15 percent alcohol; the standard at the time was 25 percent. But the trend has grown dramatically. Beginning in late 2013 and especially in 2014, companies released a string of low-alcohol soju after the brand Joeun Day, which was exclusively sold in Busan and South Gyeongsang, arrived at stores in the Seoul area.

At the end of last year, soju with an alcohol content of less than 18 percent accounted for an estimated 20 percent of the soju market.

Fruit-flavored alcoholic drinks, called “ready-to-drink,” or RTD, have shared in the boom. A whiskey manufacturer in Busan, Golden Blue, started selling Golden Blue Diamond in May 2014. The drink has an alcohol content of 36.5 percent; it became an industry leader.

Diageo Korea lost 2.1 percent of its 2014 sales by volume, the association said, and Pernod Richard Korea’s sales dropped 13.5 percent. Golden Blue’s sales during the same period were up 57 percent.

But the whiskey market doesn’t seem to have a bright future when compared to the outlook for other drinks. In its own study, Diageo Korea projected that the overall alcoholic beverage market would increase just 2.5 percent between 2014 and 2018.

And the market that is expected to see the biggest increase reflects the recent change in alcohol consumption trends. The market for mixed drinks, including RTD and cocktails, is expected to grow 28.5 percent, while that for beer, thanks to diversification from the numerous imported beers available today, is expected to enjoy a 2.5 percent increase. 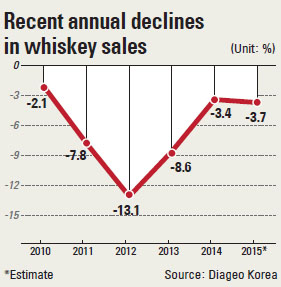 Imported beer sales are expected to jump 15.1 percent by 2018. Soju, which has been the staple alcoholic drink for Koreans, is expected to remain nearly unchanged in market size with only 0.3 percent growth. The whiskey market, which industry sources say has been shrinking since 2007, is expected to fall 1.4 percent and is the only market segment that is expected to shrink.

Diageo Korea cited major market changes for the expected trend. They include the diversity of alcoholic beverages, a polarization of consumer preferences for either premium whiskey or cheaper alcoholic beverages and the increase in the number of female drinkers as the main forces driving the trend.

Diageo still dominates the whiskey market, but needed to change in order to secure its current position. When Cho, the company’s new CEO, was first hired by the company in July 2013, he recognized the changing drinking habits in Korea and decided on steps to secure its No. 1 position: diversifying its products and strengthening marketing.

“In the last two years we have tried to reinvent ourselves as a company that is genuine and is close to our customers, through innovations and releases of new products,” he said on Saturday. “In order to reinvent ourselves, we became a company that raised its competitiveness by quickly reading the changing desires and needs of our customers. That is why we introduced new products, including Windsor W Ice.”

Diageo Korea has been adding other new products to its popular brands this year, including its vodka lineup. In April the company introduced flavored vodkas under its Smirnoff brand. Targeting consumers in their 20s and 30s the company released Smirnoff Espresso and Blueberry.

Diageo Korea has also diversified its distribution system and found new markets. It started in April to supply 200 milliliters. Smirnoff bottles with 40-percent alcohol content to the Korean military l after signing a one-year supply contract with the armed forces in March.

According to the Ministry of Defense, it is the first vodka to be sold in military exchanges, which are free of taxes and therefore can sell the liquor at about half the civilian market price.

And why vodka for an institution as conservative and tradition-bound as the military? The short answer may be that most soldiers are young and like their civilian counterparts, have different tastes in liquor than older Koreans. Diageo was able to get a military contract with procurement rules that say only domestic goods can be sold at exchanges.

The Smirnoff vodka sold to soldiers is produced at the company’s plant in Icheon, Gyeonggi, which opened in 1981. It is the only Diageo distillery in Asia.

Two months after Cho took the reins at the local Diageo operation, it invested 5 billion won ($4.4 million) to expand its production lines in Icheon. In May 2014, the company also increased its exports of its RTD products such as Smirnoff Ice Green Apple in Japan. As a result, last month the company celebrated a year’s production of 2 million boxes of liquor at the Icheon plant. The comparable figure for the 2009 fiscal year was 190,000 boxes, the company said.

That production included $30 million for export, more than double the $13 million from foreign sales in the 2013 fiscal year. The products made at the plant are now exported particularly to Japan, China and the Philippines.

Its latest venture is the expansion of the W Ice brand to Jeju, which the company sees as one of the three major whiskey markets in Korea after Seoul and Busan.

“The reason we’re launching W Ice in Jeju is that the whiskey market there is stronger than in other regions of the country,” said the company’s commercial strategy director, Han. “While the premium market in Korea fell 3.7 percent last year, Jeju has seen an increase of 4.7 percent.”

When asked if the increased number of Chinese tourists in Jeju was one of the reasons, Cho said they didn’t have a huge impact on liquor consumption growth, although it indirectly helped Jeju’s economy grow faster than other Korean regional markets and thus contributed to whiskey sales.

Diageo Korea wants to become the No. 1 whiskey seller on the island and displace its main rival, Pernod Ricard Korea. If the low-alcohol beverage proves to be a success, the company plans to launch W Ice in the greater Seoul area, Korea’s largest market.

Whiskey isn’t the only focus for Diageo Korea. Currently the company is enjoying good sales for its Guinness ale, but ale is only a small part of the market, outpaced by the dominant lager brews.

“Our long term goal is to eventual import lager beers,” Han said. “For now our focus is mostly on promoting Guinness.”