If gov’t doesn’t have a solution, residents may

If gov’t doesn’t have a solution, residents may 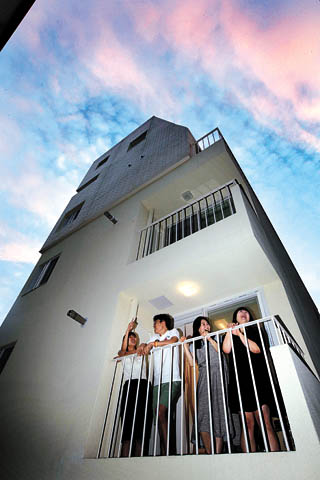 The Snail House is home to 17 young people who had trouble finding housing previously in Seodaemun district. By Oh Jong-taek

Residents of several districts in Seoul have gotten tired of waiting for the government to solve some problems. So they’ve started solving them on their own.

In Mapo District, western Seoul, four in 10 residences are occupied by single people. There are plenty of jobs in the area along with universities, such as Hongik, Yonsei, Ewha and Sogang. Many students travel from their hometowns to study in Seoul and need to find a place to live.

But apartments suitable for singles aren’t easy to find. And the government is reluctant to intervene in what is basically a market problem of supply and over-demand.

The Mindalpaengi Union is a non-profit organization formed to solve the problem of housing shortages for students in the Mapo and Seodaemun Districts.

This year, the union has amassed private investments of 200 million won ($1.7 million) and social investment funding of 500 million won from the Seoul Metropolitan Government.

With the funds, the union leased a newly-constructed building in Namgajwa-dong in Seodaemun District and named it the Snail House (“Mindalpaengi” is a portmanteau of the Korean words for slug and snail; the concept is that a slug can become a snail when it gets a shell, or a home). The building is home to 17 young people who pay 230,000 won a month. The emphasis is giving young people housing at a stable price for several years.

“Since we have a five-year contract with the landlord and the city government, there are no concerns about residents being thrown out into the streets even when rent elsewhere rises,” said Lim Kyoung-ji, the 27-year-old chairwoman of Mindalpaengi Union.

In addition, if one of the tenants falls behind on rent, the union helps out for at least two months.

The rent is cheap and the living conditions good. In the Snail House, everyone has their own bedroom but four people share a 20 pyeong (711.7 square feet) living room, veranda, kitchen and bathroom.

Hwang Geum-sil, a 28-year-old who came to Seoul from Jeju Island, lived for five years in a gosiwon (buildings with cubbyhole rooms often used by students, especially those studying for national examinations) before moving into Snail House.

“I lived in a small, confined space that no sunlight reached and paid 300,000 won a month,” said Hwang. “The walls were made of plywood, so I could hear the person in the next room tossing and turning. Now it feels like I’m living in a real home five years after coming to Seoul.”

The Mindalpaengi Union paid special attention to the emotional factors of sharing a place of residence. Incoming residents meet up once a week for two months before moving in, and take time to get to know their new roommates. Only after those meetings take place do they decide whether to move in or not.

“At first, I was hesitant to move in because of the fear of living together as a group, but after the meetings I was convinced the people were nice enough,” said Lim So-ra, 32. “The Snail House is kind of like the start of a new family.”

Together Housing Cooperative Society is a cooperative devoted to solving residential problems without the government’s help.

“The government isn’t helping people with their residential problems,” said Park Jong-sook, 42, the head of the organization.

The cooperative used Facebook and blogging sites to recruit 45 members, including investors and tenants.

Last year, Together Housing borrowed 500 million won from the municipal government and, with an extra 270 million won that came from investments by cooperative members, purchased a two-story apartment in Seongsan-dong, Mapo District. It has been remodeled for use by 10 people. The residents pay 10 million won as a deposit and 300,000 won as monthly rent. There is no need to worry about an increase in rent because the organization owns the property.

Meanwhile, a group of mothers in Guro District have embarked on solving a food-related problem that affects their children.

The starting point was the 2011 nuclear reactor accident in Japan’s Fukushima Prefecture. Fear of radiation from the disaster in Japan prompted the Seoul Metropolitan Government to pass certain regulations about food safety in Aug. 2013.

But the mothers of Guro District didn’t believe they were enough to keep their kids safe and healthy. In Nov. 2013, a district official along with 100 housewives decided to propose a proposition that required a supply of radiation-free food for Guro District’s elementary, middle and high schools for student lunches and followup inspections.

“I wanted to get out there and do something about our children’s school food rather than wait passively for the government to act,” said Lee Eun-yeong, 42, one of the housewives.

For the proposition to be approved by the district council, the group was required to get 7,000 people, two percent of eligible voters, to sign a petition. Even though it was a formidable challenge, the Guro residents surpassed their goal and obtained signatures from 8000 people in just three months.

After the proposition was passed, the mothers’ efforts continued. For the execution of the ordinance, a budget of about 100 million won was needed. But the district council had a budget squeeze.

The Guro mothers decided on some psychological pressure. They sought out the 16 District Council members and gave each a rose with the message “Keep our children safe.” A budget of 36 million won was passed and radiation inspections on food delivered to schools in the Guro District are done twice a year.