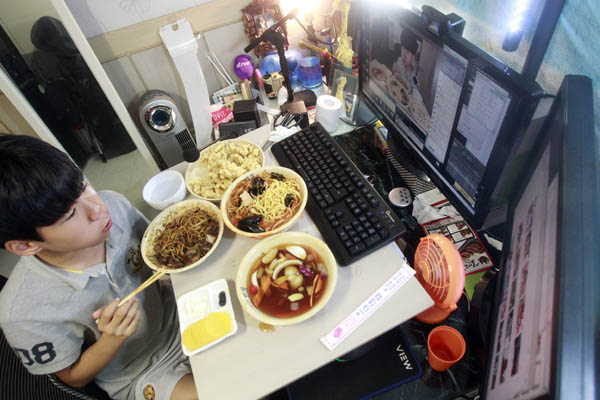 Every evening, 14-year-old Kim Sung-jin orders fried chicken, pizza or Chinese food to eat in a small room in his family’s home south of Seoul.

He gorges on food as he chats before a live camera with hundreds, sometimes thousands, of teenagers watching.

Better known to his viewers by the nickname “Patoo,” he is one of the youngest broadcasters on Afreeca TV, an app for live-broadcasting video online launched in 2006.

Kim, who has a delicate physique and chopstick-like slight limbs, has been broadcasting himself eating almost every evening since he was 11. Sometimes he invites friends to eat with him. To add fun, he once wore a blonde wig and dressed as a woman.

While the Internet has been making stars for years ? from bloggers to gamers who play for millions of YouTube viewers ? outsiders may find it puzzling, if not outright bizarre, for young people to spend hours watching someone eating.

But in South Korea, Afreeca TV has become a big player in the Internet subculture and a crucial part of social life for teens.

Shows like Kim’s are known as “Meokbang,” a mash-up of the Korean words for broadcast and eating. They are the most popular and often most profitable among some 5,000 live shows that are aired live at any given moment on Afreeca TV.

Kim started the show essentially to find someone to eat with. His parents worked in another city so he was living with his grandparents, and they ate dinner so early he got hungry at night. He says the show made his dining more regular, although most of his meals on Afreeca TV begin after 10 p.m.

The show also brought him unexpected joy: He said that even though he’s just an ordinary teenager, “People say hello to me on the street.”

“I do what I want. That’s the perk of a personal broadcast.”

Many connect the popularity of Meokbang to the increasing number of South Koreans who live alone, and to the strong social aspects of food in this society.

“Even if it is online, when someone talks while eating, the same words feel much more intimate,” said Ahn Joon-soo, an executive at Afreeca TV.

He noted South Koreans’ common habit of bidding farewell to friends by saying, “Let’s eat together next time,” even if they don’t literally mean it.

There are plenty of other quirky offerings on Afreeca TV.

Late at night, there is “Sul Bang” - broadcast drinking - in which melancholic South Koreans drink liquor alone discussing their tough lives. Then there is “Study Bang,” or broadcast studying: A screen shows the hand of an unidentified person writing notes on a thick book under the light of a desk lamp.

“Young generations believe that TV is naturally something like Afreeca TV where they can interact with broadcasters,” said Ahn, the company executive, who believes TV eventually will be completely replaced by such apps.

Ahn Won-jun, a 17-year-old high school student, said he prefers to eat dinner in his room to watch Kim’s Meokbang, rather than dine with his parents.

Kim isn’t a particularly polite virtual dinner guest. He burps loudly before his audiences and sometimes walks off abruptly, announcing with some specificity that he needs to use the bathroom.

He usually leaves his fans with a mission, during his absence, promising a prize to the person who last clicks the “like” button when he is back.

Hardcore Afreeca TV viewers are drawn to hosts like Kim because they can interact with them, unlike more distant TV stars. Fans say they feel their blood rush and hearts flutter when a host reacts to their comments, singling them out in the stream of hundreds of live chat messages.

“I was so moved,” said Lee Yeon-joo, a 15-year-old recalling the moment when a 26-year-old man read her message in the middle of his live show. “You cannot really approach celebrities.”

Afreeca TV users can get broadcasters’ attention by giving them “star balloons,” which cost them about 10 cents apiece. The show hosts keep most of that money, though Afreeca TV takes a cut of up to 40 percent.

Most broadcasters, including Kim, are reluctant to reveal how much money they make. Afreeca TV said out of some 300,000 broadcasters who air their show at least once a month, the top 500 make more than what one would normally make by working full time, but the company declined to be more specific.

Live-streaming videos are going mainstream, both in South Korea and overseas.

In Asia, services such as YYTV in China have been in use by tens of millions of users for years, and also have developed ways to let broadcasters generate income.

Meerkat and Periscope from Twitter, two live-streaming apps in the U.S., were launched in March. Facebook is launching its own live-streaming service called Live, although it will be only available for famous people.

South Korean search giant Naver rushed to launch a real-time video service where K-pop stars can live-stream their behind-the-scenes lives. One of the most talked-about TV shows on a South Korean TV network this year was “My Little Television,” which adopted similar features to Afreeca TV, such as the format of one person broadcasting a show live while responding to comments from viewers.

Afreeca TV’s model may not translate across borders, however. The company’s efforts to make inroads in Japan, Taiwan and the United States have met little response.