Documentary explores the need to face the past

Documentary explores the need to face the past 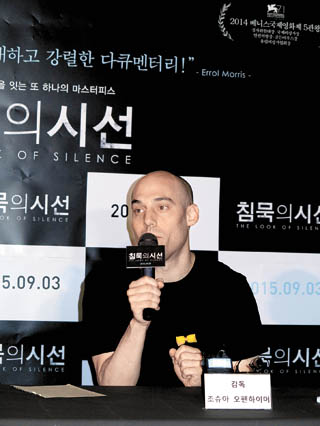 Joshua Oppenheimer talks about his latest film on Wednesday in Seoul. Provided by At Nine Film

In “The Look of Silence,” director Joshua Oppenheimer conveys a universal message of facing the past.

Following his Academy Award-nominated “The Act of Killing” (2012), Oppenheimer again explores the 1965-66 massacres that took place in Indonesia when the military regime took over.

While the previous documentary focused on the atrocities of the anti-Communist purge which resulted in the death of more than a million innocent civilians, his latest focuses on the lives of the victims’ remaining families.

The protagonist is an optician named Adi, whose older brother Ramli was killed during the purge before he was born.

The ghost of Ramli has always followed him, but it wasn’t until Oppenheimer showed him video footage of the perpetrators excitedly explaining what they had done to Ramli that he realizes what really happened to his brother some 50 years ago.

The film juxtaposes Adi watching the footage in silence and him meeting the perpetrators in person, asking them to take responsibility for their actions.

Adi quietly asks why they performed such atrocities, and in response the perpetrators tell him he would have been killed himself back then for pursuing such questions, and that what he was doing constitutes an act of Communism.

His numerous attempts are ignored but there is nothing he can do because the killers are still in power.

Although the film shows Adi’s failure to receive the apology he deserves, Oppenheimer says it is one way to “make visible the abyss of fear and guilt that is dividing everybody in the society.”

“Even if we fail in individual confrontation to get an apology, we succeed through the film as a whole in inspiring the justice, truth and reconciliation which were impossible before,” he said during a press conference in Seoul on Wednesday.

He said that his previous film opened the door to discussing the incident and “talking about the genocide as a genocide.” Oppenhemier emphasized that people should face the past in order to overcome past wounds.

“We can never run away from our past. Our past is us. ... It is right there in the open air and it will never heal until people actually look at it and attend to it,” the 40-year-old American filmmaker said.

He also shared empathy with the Korean people, who have experienced similar historical events with tragic incidents like the Gwangju and Jeju Uprisings, in which massacres of Korean civilians were justified by the ideology of anti-Communism.

“Korea has been struggling with painful and often unacknowledged history so it is an honor to share this film about how we cannot run away from our past,” he said.