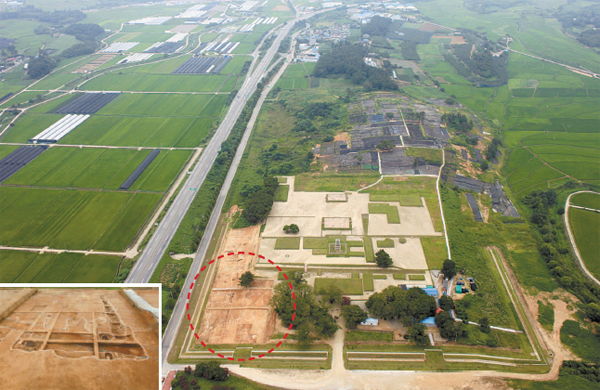 In Iksan, North Jeolla, archaeologists found what might be the royal kitchen of the Baekje Kingdom (18 B.C. to 600 A.D.). If further study proves it true, it would mark the first discovery in Korea of a royal kitchen from before the 10th century. Provided by the Cultural Heritage Administration

What kings and queens ate and the utensils and dishes they used have long been the fascination of historians.

They provide clues to the diet and nutrition of ancient people, as well as the cooking methods and dining culture.

But this may change, due to recent findings by Korean archaeologists.

What just might have been the royal kitchen from Korea’s Baekje Kingdom (18 B.C. to 600 A.D.) has been found, the Buyeo National Research Institute of Cultural Heritage announced on Aug. 20.

This comes as interest in Baekje is higher than ever: The so-called Baekje Historic Areas were added to Unesco’s world heritage list in July. The areas refer to eight sites in Iksan in North Jeolla, and Gongju and Buyeo in South Chungcheong, which were important places in Baekje history.

And what’s presumed to be the royal kitchen was found in the Wanggung-ri area (Korean Historic Site No. 408) in Iksan. The area is generally believed to have housed the royal palace of Baekje.

This marks the first discovery of a royal kitchen from the country’s Three Kingdoms era (57 B.C. to 668 A.D.), as well as the following Unified Silla Period (A.D. 676 to 935). Baekje was one of the three along with Goguryeo and Silla.

Previously, one could only imagine what the Three Kingdoms era kitchen looked like based on murals from Goguryeo (18 B.C. to 600 A.D.).

The Buyeo institute said that during the archaeological exploration, which began in March, they found the foundations of a building along with a pit where sot (traditional cauldrons made of cast iron), various pieces of pottery and whetstones were buried. Some of the pottery bore traces of liquid.

Researchers also believe they found a drain next to the site.

Furthermore, about two meters (six feet) from where they found these artifacts, archaeologists found remnants of charcoal, burned soil and a wall with burn marks, all signs that led researchers to believe this was the site of a royal kitchen. According to Sim Jeong-bo, a cultural heritage adviser, in ancient Korea only palaces and temples had a separate building for the kitchen.

Bae Byeong-seon, the head of the Buyeo institute, said, “It’s extremely important that we found cookware and their traces in the site of a palace,” adding “In no historical record can we find anything about how rice was cooked or what kind of cookware was used in the kitchen from the Three Kingdoms era.”

The institute also said the cauldron showed features from both the Three Kingdoms era and the Unified Silla Period, revealing how cauldrons from the era transformed over time.

Findings from the site include pottery, whetstones as well as sot (traditional cauldrons made of cast iron). Officials say the cauldrons show features from both the Three Kingdoms era and the Unified Silla Period.

However, not all experts agree the site indeed was a royal kitchen of Baekje. They emphasize more study is needed. For one, critics question why farming tools like a hammer were buried in the pit, along with kitchenware. They say the Baekje people could have buried the items to discard them.

Some also note the building foundations are way too close to the main structure of the palace to be the royal kitchen. Also, the site may or may not have been part of the Baekje palace.

On this, officials from the Cultural Heritage Administration, which oversees the Buyeo institute, say there is a possibility the building was a temporary kitchen rather than a permanent one, and they will certainly conduct more studies.

The Wanggung-ri area in Iksan is believed to have been the site of a palace King Mu (Unknown-641) built during his reign from 600 to 641. Since 1989, Korea has been conducting annual excavations at the site and archaeologists found building foundations and about 10,000 relics.