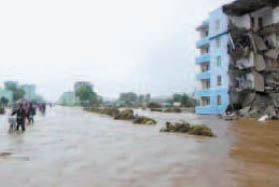 Rason in North Korea was flooded by heavy rainfall on Aug. 22 and 23. Nearly 40 people died and more than 1,000 houses were damaged.[Screen capture from YouTube]

The North Korean city of Rason is still reeling from massive flooding wrought last month by typhoon Goni, whose heavy winds and rains damaged its already insufficient infrastructure and has hindered recovery efforts.

The storm hit the city, located in the Rason Special Economic Zone bordering China and Russia, on Aug. 22, leaving nearly 40 people dead and destroying more than 1,000 houses to displace some 5,200 families.

While South Korea was spared, the North sustained severe damage due to its lack of preparedness in coping with natural disasters.

Pyongyang set up the special economic zone in the early 1990s with the aim of establishing the border city as a hub for economic growth via foreign investment.

Since the flood, North Korea has reported extensively on recovery efforts.

Less than a week after the storm hit, North Korean leader Kim Jong-un issued an order during an extended meeting of the Central Military Commission to speed up rehabilitation so the city could return to normal operations before Oct. 10, which marks the 70th anniversary of the founding of the Workers’ Party.

He also directed the military to deploy soldiers to Rason to carry out repair work, while Pyongyang has sent relief items like rice and fish to be distributed among locals, according to Korean Central Television on Friday.

Multinational organizations like the European Union (EU) and the United Nations Children’s Fund (Unicef) have also provided assistance. The EU donated 150,000 euros ($167,434) in aid, while the United Nations sent medical aid for up to 60,000 people.

The South Korean government has said it will consider providing flood relief should the North request it, though Pyongyang has yet to ask, it said.

North Korea’s poor sewage system was one of the underlying factors attributed to the massive flood damage seen in Rason.

Recognizing his country’s lack in infrastructure, the late North Korean leader Kim Jong-il called for improving the nation’s water drainage system in 2007, after parts of Pyongyang became submerged following heavy summer rains. Since then, however, not much has been done to improve upon the situation.

While Pyongyang was spared heavy damage this summer, it could face serious trouble in the coming years if it neglects to fix its poor drainage system. And the problem could be much worse than Rason, with the capital currently rushing to build some 100,000 new apartments - though apparently without much consideration for a sewage plan.

So far, about 30,000 apartments have been constructed, and there have been no signs of significant improvement in the city’s drainage system.

Still, while North Korea has not requested aid from Seoul, it has asked civilian companies in the South to provide sewage tools and equipment, which the North reportedly prefers over Chinese-made products due to their better quality.

“North Korea’s demand to set up social overhead capital could be a new opportunity for construction firms in South Korea that have struggled to find new sources of growth elsewhere,” noted Lim Eul-chul, a North Korean studies professor at Kyungnam University.