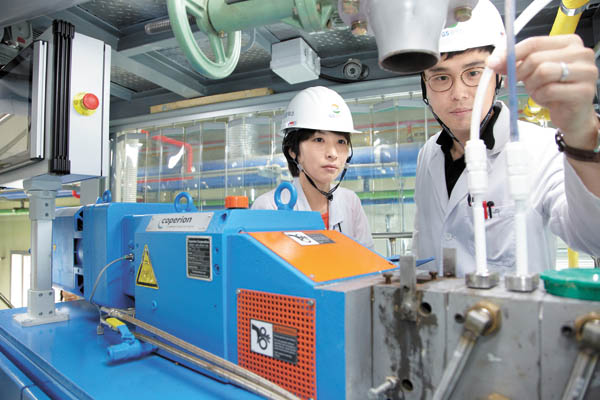 An employee at GS Caltex examines facilities for producing bio-butanol. Provided by the company

Established in 1986, GS Caltex has been developing various products in the petrochemical field. Its most recent achievement is the eco-friendly fuel called bio-butanol.

Currently, the most dominant biofuel used as a substitute for oil in vehicles is bio-ethanol. But bio-ethanol requires additional investments to be distributed through existing infrastructure designed for gasoline and diesel. One of those necessary investments is the flexible-fuel vehicle, which is a specialized car designed to safely transport the highly concentrated fuel.

Bio-butanol, on the other hand, has a higher energy density than bio-ethanol and offers numerous advantages. Blended with gasoline, it can be used in cars with gasoline engines without any modifications and can be transported using existing infrastructure, among other benefits.

Bio-butanol is also used as the base material for products used in everyday life. Adhesives used in inks, bonds and paint, detergents for semiconductors, flavoring agents for food, soap and make-up products are all items that can produced from bio-butanol.

According a 2013 study, the annual global demand for butanol is 3.97 million tons, of which the Asian market makes up 50 percent. This number is expected to rise to 4.9 million tons per year by 2018.

China is also eyeing bio-butanol as a next-generation biofuel. But Chinese companies are facing technical difficulties to keep up with the trend.

Their biggest obstacle is their reliance on expensive base materials such as corn and cassava. Burdened by an unbalanced profit structure, the actual production of bio-butanol is continuously being postponed in mainland China.

On the contrary, having started research in 2007, GS Caltex completed an integrated processing system that includes every step of the bio-butanol production process, from fermentation and absorption to oil refining. The newly developed production line was verified in a pilot program and is currently awaiting commercialization. The demo plant, which is now in the pre-production stage, will be completed later this year.

In the process of developing the integrated process system, GS Caltex acquired more than 40 domestic and international patents.