Secret ’70s bunker will be opened to the public

Secret ’70s bunker will be opened to the public 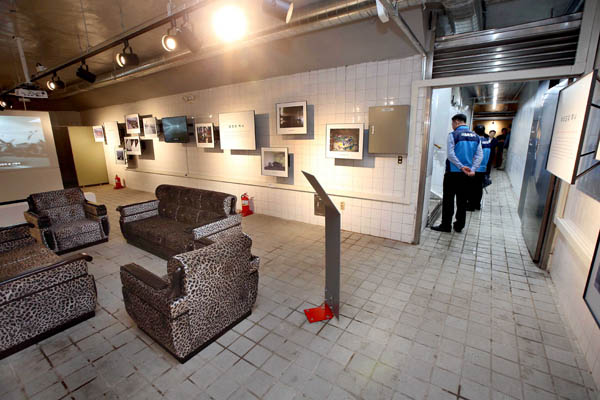 A secret underground bunker in Yeouido was unveiled to the public on Thursday. The bunker, which may have been built in 1976, includes a VIP room leading to the pavement. The Seoul city government will open the bunker to sightseers starting Oct. 10. By Oh Jong-taek

A secret underground bunker in Yeouido, western Seoul, dating back to the 1970s will be opened to the public.

The government says it has no records about the construction of the bunker or its use, but it is suspected to have been built to protect former President Park Chung Hee in case of a North Korean attack during a public ceremony.

The bunker will be shown to the public for the first time on Oct. 10, said Kim Jun-ki, head of the Seoul Metropolitan Government’s Urban Safety Headquarters, at an event held at the site on Thursday.

“The bunker will undergo remodeling at the beginning of next year, and the site will be transformed into a cultural space by October 2016.”

The facility was discovered by accident in 2005 during the construction of a bus transfer center in front of the former Seoul Yeouido Exhibition Center, which stretches to a depth of 7 to 8 meters (23 to 26 feet).

The bunker is 793 square meters and is equipped with a shelter, bathroom and a VIP room.

“The site was not even marked on the underground facility blueprint,” explained Song Jung-jae, chief of the Urban Safety Division. “We were able to confirm that the facility was a bunker only after close observation using a videoscope.”

The Seoul Metropolitan Government asked the Ministry of National Defense for a record of the construction of the bunker. The ministry responded by saying, “There are no related
materials.”

The most convincing hypothesis is that it was created to protect VIPs during an event celebrating Armed Forces Day in Yeouido in 1977.

It is believed the Blue House security service secretly built the bunker after obtaining intelligence that the precision of North Korea’s FROG-5 missile system had been raised. The facility was constructed directly below the platform that former strongman Park Chung Hee stood on during the event.

In addition, construction of the secret facility is speculated to have occurred in late 1976, according to an analysis of aerial photographs.

The bunker in Yeouido was designated an important cultural property for Seoul in late 2013. The Seoul city government is looking into using
the space as a media art exhibition hall, considering its darkness and acoustics.

“The remodeled facility will become an example of successful urban regeneration using military facilities, just like the case of an ammunitions plant in Karlsruhe, Germany, that has been transformed into a media art center,” said urban and social affairs researcher La Do-sam from the Seoul Institute.

The public will be invited into the bunker every weekend until Nov. 1. Only 30 people will be able to enter at a time for safety reasons.

Reservations should be made through safe.seoul.go.kr.