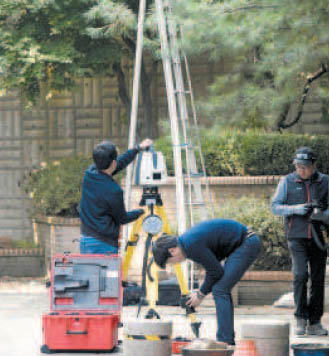 Forensics authorities operate a 3-D scanning device on Wednesday at an apartment complex in Yongin, Gyeonggi, where a mid-aged woman was killed while building a shelter for stray cats. NEWSIS

With few clues, no known witnesses and no suspects in the murder of a middle-aged woman who was fond of cats, local police said Thursday they would put some 20 residents of an apartment building in Yongin, Gyeonggi, through lie detector tests.

The approximately 20 people were at home when a 55-year-old woman only identified by her surname Park was hit by a cement brick 20 centimeters (8 inches) in length and 10 centimeters in width Oct. 8 at around 4:40 p.m.

Park and a fellow member of an online cat lovers club were in a garden near the entrance of an apartment building in the complex. They were building a makeshift shelter for stray cats in the neighborhood.

The Yongin Seobu Police Precinct believes the brick was thrown intentionally from one of the windows overlooking the garden. They are not sure whether the person who threw it intended to do bodily harm to either woman.

The brick bounced off Park’s head and managed to also inflict injury on her 29-year-old friend, a neighbor in the apartment complex also surnamed Park.

Thursday’s polygraph tests were the latest attempt by authorities to track down a suspect, as both CCTV footage and a DNA test on the brick failed to provide any leads. The brick was sent to the National Forensic Service, but they could find no DNA except for the victims’. CCTV cameras around the area also failed to capture the assault.

The case has gone viral on the Internet among pet lovers, and the victim has been nicknamed “Cat Mom.”

The older Park died after arriving at the hospital, while the younger Park is hospitalized with injuries that aren’t life-threatening. The two victims live in the same Yongin apartment complex, which is composed of four 18-story buildings.

The brick itself was found some seven meters (23 feet) away from the building.

There are two units on each floor, and about 130 people living in the entire building.

The brick has been sent back to forensics for a more thorough look. Yongin police said they collected DNA samples from every family in the building it was thrown from. Polygraph tests will be administered to residents who were home at the time of the death and whose windows overlooked the scene.

Neighbors told police that they had seen the pair feeding stray cats from time to time but said they weren’t aware of anyone who openly criticized or argued with them about their cat-loving activities.