[Sponsored Report] Doosan lives up to its belief in public service

[Sponsored Report] Doosan lives up to its belief in public service 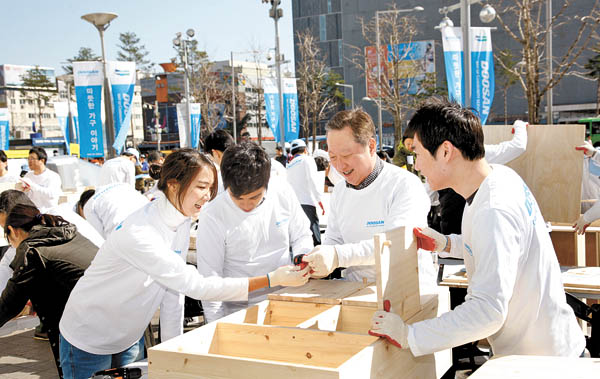 On the Doosan Day of Community Service held last March, Chairman Park Yong-maan (third from left) and 200 employees engaged in volunteer projects in front of the Doosan Tower. [DOOSAN]

To act on this principle, Doosan is organizing various projects, from making donations to organizing social programs.

The group’s largest activity is the Doosan Day of Community Service. On the same day, Doosan’s staff members all around the world practice the value of caring for their neighbors, as well as society more broadly.

On Oct. 24, 2014, more than 10,000 Doosan employees in 13 nations, including in South Korea, the United States, Europe, China and the Middle East, engaged in various activities each tailored to the needs of their communities.

In particular, Chairman Park Yong-maan showed enthusiasm for the installation of “Yellow Carpets,” which were devised to make streets safer for young children.

Yellow Carpet refers to a yellow-colored safety zone on sidewalks specially designated for children in order to protect them from car accidents. Doosan installed 14 Yellow Carpets in Seoul so far.

On March 23, the second Doosan Day of Community Service took place. Whereas the first event was held by 130 overseas offices in 13 countries, the second event was joined by 10,000 employees from 158 offices in 16 nations.

On the day, Chairman Park sent a video message to local and foreign employees, reiterating Doosan’s role in helping society and promising to establish the Doosan Day of Community Service as a new corporate tradition. The event is planned to take place twice a year.

Another ongoing way that Doosan is giving back is the “Time Traveler” project. Launched in 2012, the program targets students from their second year of middle school to their first year of high school in Seoul.

Through this project, Doosan helps troubled teenagers in difficult situations discover their own values and establish a positive outlook on the world through the art of photography.

The results were positive. More than 95 percent of participants attended every session of the eight-month program, and research done in cooperation with Chung-Ang University showed that the project enhanced participants’ mental stability, self-regard and positivity for the future.

Meanwhile, Doosan Heavy Industries & Construction is also running a lineup of programs to give back abroad in Vietnam, India and countries in Southeast Asia.

In Vietnam, Doosan is focusing on providing medical services and scholarships, along with running a volunteer team consisting of 1,000 local employees.

In China, Doosan Infracore has been building “Hope Elementary Schools” since 2001. The intent is to help create schools in underdeveloped areas that do not have proper educational facilities.