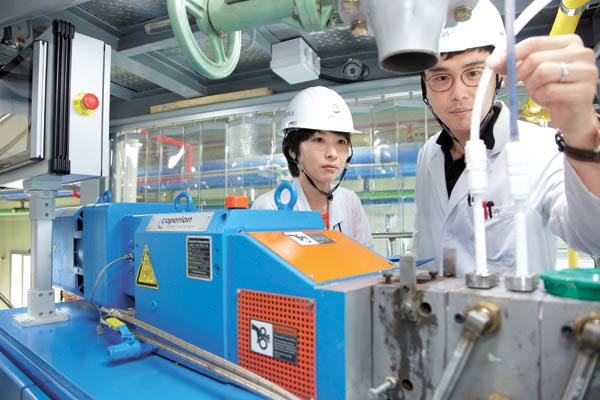 GS Caltex is preparing for the distribution of biobutanol.

Having established its Yeosu research institute in South Jeolla in 1986, GS Caltex has developed various products in the petrochemical field such as lubricant oils and polymer products. Its most recent product is the eco-friendly fuel biobutanol.

Currently, the most popular biofuel in the transportation field is bio-ethanol. But in technical terms, bio-ethanol has major drawbacks in that it requires additional investment in distribution facilities. The reason is that bio-ethanol is not compatible with infrastructure used for other, more frequently used fuels.

Biobutanol has a higher energy density than bio-ethanol, and once blended with gasoline, it has a higher fuel efficiency. But the biggest benefit of biobutanol is that it can be transported and stored without reforming the existing infrastructure for petroleum-based fuels.

Many products used in daily life can also be made from biobutanol as the base material. Adhesives used in ink, paint, detergents for semiconductors, flavoring agents for food, soap and makeup are all items on this list.

Research from 2013 shows that the global demand for butanol in the fuel market is 3.9 million tons, of which the Asian market takes up 50 percent. This number is expected to rise to 4.9 million tons per year by 2018.

Meanwhile, after eight years of research, GS Caltex has completed an integrated process system which includes every step of biobutanol production, from fermentation and adsorption to refining. The newly developed production line was verified in a pilot operation and is currently waiting for commercialization. The demo plant, now in its pre-production stage, will be completed in 2016.

One of those patents is a technology that produces the fuel from a wide variety of inedible biomass, from waste wood to corn stalks. This cut the production cost to an incredibly low point, easily surpassing the cost competitiveness of other, more popular fuels.