The Ministry of National Defense announced last week that the late James Van Fleet, the commanding general of the U.S. Army during the 1950-53 Korean War, was named the third winner of the Paik Sun-yup Award, sponsored by the JoongAng Ilbo, for his contributions to the U.S.-South Korea alliance.

“General Van Fleet devoted himself to South Korea’s national defense during the Korean War and contributed to the settlement of the South Korean Army after the war,” said Defense Ministry spokesman Kim Min-seok.

As commanding general of the U.S. Eighth Army from 1951 to 1953, he provided war supplies and a training system for the Korean Army to expand to 10 divisions, also paving the way for the establishment of the Korea Military Academy after the conflict.

Van Fleet was also the first person to shout out the symbolic chant of the Korea-U.S. alliance, “We go together!” 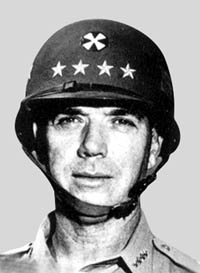 Joseph McChristian Jr., 73, Fleet’s grandson and the chairman of the Van Fleet Foundation, accepted the award on behalf of his grandfather at the reception for the 47th ROK-U.S. Security Consultative Meeting.

Like his grandfather, McChristian graduated from West Point; he is also a Vietnam War veteran. Since being discharged from the Army in 1977, he has participated in a variety of international activities to commemorate Van Fleet’s achievements.

Van Fleet’s son, James A. Van Fleet Jr., who also entered the Korean War as an air force pilot, disappeared during a night flight over North Korea on April 4, 1952.

At the time, the senior Van Fleet eventually halted the search for his son, saying that the soldiers under his command should not risk being sacrificed in the mission.

“Peace is not free,” McChristian said. “The peace that we enjoy nowadays was accomplished by the previous generations during the Korean War.

Despite any hardship, the alliance between the two countries should be strengthened.”

“I think the economic and cultural alliance between the two countries will become more important in the future. I hope the friendship between my grandfather and Gen. Paik Sun-yup leads to the two countries’ lasting friendship,” he added before shouting, “We go together!”

When asked how he felt about receiving the award on behalf of his grandfather, McChristian replied, “My grandfather told the Koreans [serving with him] when he left the country in 1953 that Korea was his second home.

Even though it’s only been two years since I first visited Korea, I think I understand what he meant.”

He continued, “Koreans only know that he was a four-star commanding general during the Korean War.

In fact, he actually adopted the training system from West Point after the war to contribute to the establishment of the Korea Military Academy [in Nowon District, northeastern Seoul].”

When asked about his vision as chairman of the Van Fleet Foundation, McChristian said, “The George Marshall Foundation is currently storing my grandfather’s diary with his daily records during the war.

“Even though it’s still not translated into Korean, it’s worthy to be considered as important historical material.

“I’m seeking to digitize them and introduce them to Korea.”