Fighting fires, then fighting for their lives

Fighting fires, then fighting for their lives 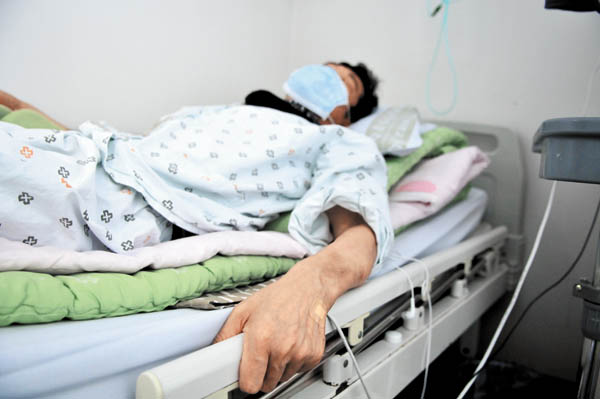 Lee Seong-chan, a 47-year-old firefighter, suffers from multiple myeloma. He has not received any government support for his cancer even though he was exposed to toxins and harmful carcinogens in the line of duty. Lee worked as a firefighter for 18 years. [SONG BONG-GEUN]

After receiving cancer treatment, Lee Seong-chan dropped from 70 kilograms (154 pounds) to 55 kilograms, and his muscular figure drastically diminished. The veins bulged from his arms, which he once used to lift heavy gear at the scenes of accidents and fires.

The 47-year-old was dispatched to 733 accident sites during his time working as a firefighter. But now, rather than battling fierce blazes, he is battling multiple myeloma, the second-most common hematological cancer, at Paik Hospital in Busan.

The disease debilitates the muscles and bone pain is a common symptom.

“Besides inhaling toxic gas at fire sites, it’s hard to find out other reasons to explain the cause of the cancer,” one of the doctors who oversee Lee’s treatment explained.

Saddled with medical expenses, the former firefighter submitted a claim in March to the South Korean Government Employees Pension Service (GEPS) in the hopes of receiving compensation for his therapy and requested that his condition be recognized as an occupational cancer.

However, upon review, his case was rejected.

Distraught, Lee into despair and contemplated suicide, going so far as to buy a charcoal briquette. But in his darkest moments, a sudden phone call from his mother changed his mind.

Lee has since filed suit against GEPS.

Oh Yeong-teak, another firefighter who works as lieutenant at Yeonsan 119 safety station in Jeonnam, also suffers from a debilitating form a cancer. Over the past nine months, the 42-year-old has traveled almost 350 kilometers between Mokpo and St. Mary’s Hospital in Seoul to receive treatment for acute myeloid leukemia.

“Even though he was previously treated for thyroid cancer, it is still irrelevant to this leukemia,” said Prof. Jang Tae-won, who examined Oh. “It would appear that the cancer has a link with his job fighting toxic heavy fire.”

The GEPS, also rejected Oh’s case, claiming that he contracted the disease while performing a public duty.

When asked if he was considering a suit, Oh’s voice was thin and feeble. “First of all, I will recover my health and then … [as a firefighter], there are some things I can’t do on will alone…”

Lee and Oh are just two among a number of the country’s firefighters battling against leukemia or other cancers ? part of a brand of nonsmokers and nondrinkers who were originally healthy and then mysteriously fell ill.

Medical experts understand the cause to be linked to the toxic gas and smoke firefighters are exposed to on the job.

These stories are not uncommon. Still, such appeals often go unaccepted, and since 2008, the GEPS has not recognized a single case as having resulted from occupational hazards.

Many firefighters who developed tumors are currently fighting against GEPS in an attempt to win compensation.

Kim Ki-seo, a 62-year-old retired firefighter, is in the same boat. His doctors told him in October that he might have “less than a year to live” and prescribed him new drugs developed in the United States in a last-ditch effort to save his life. But the costs, at 20 million won per month, were staggering and he couldn’t afford to continue payments.

Before retiring in 2013, Kim worked for 33 years and in that time was dispatched to more than 1,700 emergencies. He was diagnosed with multiple myeloma in 2008, and although he returned to work after undergoing surgery, the cancer resurfaced again in 2011.

In 2012, Kim submitted a claim to the GEPS, including the amount of his medical costs and a doctor’s note illustrating the direct link between his job and the cancer.

“It is sufficient to conclude that the repetitive inhalation of toxic materials during long-term duty as a firefighter directly correlates with contracting the disease,” said Min Chang-ki, a professor at the Catholic University of Korea Seoul St. Mary’s Hospital.

Now, Kim’s pain is almost unbearable. “The pride that I had from facing those fires has turned into regret,” he said.

“I wouldn’t have chosen the path of firefighter if I had known my devotion would leave me hundreds of millions of won in debt.”

The 62-year-old was diagnosed with hemopoietic dysplasia, a cancer that diminishes white and red blood cells and platelets. His debt at one point accumulated to 100 million won after he paid one credit card off with another.

“I saved so many people’s lives, but in vain; I feel like my life is abandoned,” Shin said.

He is currently preparing to file suit against the pension service since his claim, complete with a doctor’s note, was rejected. “I decided to file a lawsuit for the sake of our colleagues who are currently fighting fires,” he said.

Still, these challenges aren’t limited to the veterans.

One 35-year-old firefighter based in Seoul, who asked not to be named, is continuing to work despite having been diagnosed in January with stage-four non-Hodgkin’s lymphoma. He returned to the job in early November after receiving 10 months of cancer therapy and is scheduled to get a third round of treatment at the end of this month.

With a family to care for, the 35-year-old said he felt he had no choice but to return to work. After his petition was turned down, he withdrew all his savings and turned to his parents for financial support.

“I have two kids. I’m in a hard situation to be begging from my parents,” he said. “I can endure my pain, but it’s hard to bear a wounded heart.”