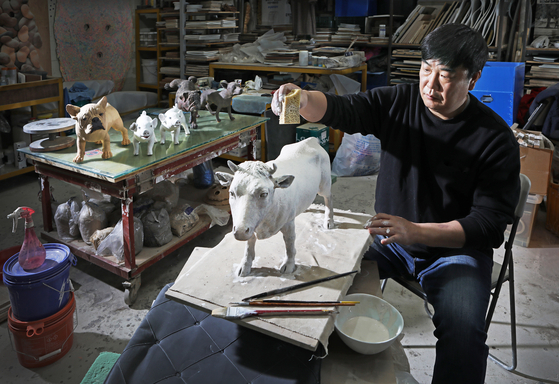 Sculptor Joo Hoo-sik works at his studio in Goyang, Gyeonggi, to recreate the image of a cow he used to play with when he was young.[PARK SANG-MOON]


The Year of the White Cow according to the Chinese zodiac is extra special for sculptor Joo Hoo-sik, who has created a piece shaped like the animal to bring back his childhood memories. He wants to share positive energy by making a sculpture of the animal that gave him everything.

To Joo, cows were more than family when he was young. He remembers the breath that came from the animal's nose and mouth, the slow blink of their eyes, the broad backs he used to climb up and the tears they shed at the slaughterhouse.

Joo was the youngest of five brothers and sisters born in Chiryang-myeon’s Bonghwang-ri in Gangjin County, South Jeolla. His hometown is known for its onggi, earthenware widely used as containers to keep food and other items. His father baked such onggi while also farming. Naturally, the sculptor was raised to keep the land close and play with all kinds of soil and clay.

As he grew older, he was bestowed with a job that would have him care for many different animals such as cows, pigs, goats, dogs and geese. His father also asked Joo to cut grass to feed the cows or take them out to the pasture when the weather allowed. 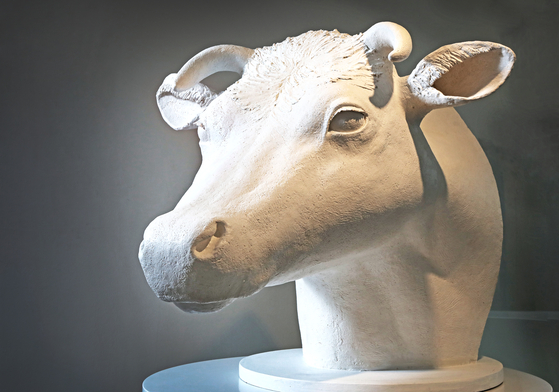 The head of a cow sculpture Joo created measures about one meter (3.28 feet) wide and 90 centimeters high. It will be on display at Space Sinseon, an art gallery located in Itaewon of central Seoul's Yongsan District. [PARK SANG-MOON]


He became friends with a particular white cow while spending most of his time after elementary school with the animals. He used to climb up and sit on the cow's back and tell it about his day. Joo felt like the cow really understood what he was saying. When the sun started to set, he and the animal would head back home from grazing.

Although he enjoyed his time close to the animals and in nature, he began to desire to move to a bigger city to study. He wanted to paint more after he became interested in the study of art, but his father was strongly against the idea. His father said at least one of his children needed to stay home and keep the family business of farming alive. Joo had to give up the idea of moving out.

But he refused to give up his desire to study art. After he started high school, he decided to rent out an empty space which used to be a barber shop in his town, and started to study art on his own. His father was still very against the idea of what he was doing, but he was sure that he could excel as an artist.

He started mastering the very basic skills from doing sketches and making small sculptures on his own, but it wasn't enough for him to get into any art schools. He excelled in all the written tests, but he continued to fail when it came to presenting his own creations. He did not get accepted into any of the colleges in Seoul that he had applied to.

He decided to go knock on the doors of the private academies in Seoul in a last ditch attempt to study his passion in the capital city. He started working at factories and delivering food to make enough money to pay for his tuition. Eventually, he was accepted into Dongguk University to study sculpture. Even better, he was awarded a scholarship as his family wasn’t well off enough to help him pay the tuition. 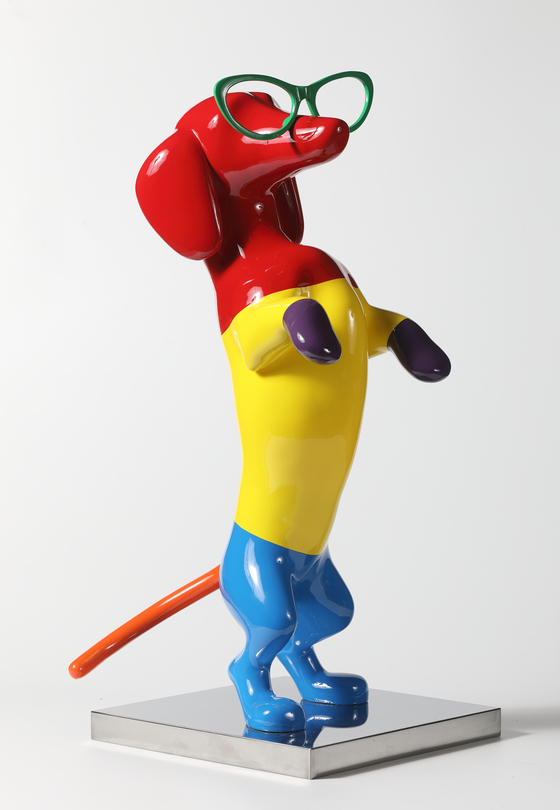 Some of the other works by Joo which center on the theme of stray dogs. [PARK SANG-MOON]


Joo's cow sculptures are more recent, and he is in fact better known for his pieces inspired by dogs. After reading “Animal Farm” by George Orwell, a satire in which the human world is reflected through the eyes of animals, he started to use the work as a motif. He used the dog as the main theme to talk about humans. He shared critical views on how humans lead lives in society and satires on their selfishness and excessive desires. He urged humans to reflect on their greediness through his works that are shaped like dogs but represent humans.

He began to focus even more on canines in 2010, when he read news about the deaths of tortured and abandoned dogs. He learned of people who abandoned their pets on a random island and how the dogs would stare out at the sea all day waiting for their owners to return for them. He felt he needed to talk about the “right” relationship between man and dog.

At first he used stray dogs as models. They all looked restless and sad. Soon he himself began to feel depressed. So he decided to focus more on lively looking sculptures of dogs to focus on the lovely side of the pets. He even started to add more warm colors.

His own dog named Eopdungi, which he has had for over 10 years, is another reason for his desire to continue making dog-related sculptures. Eopdungi was a stray puppy and after wandering into Joo's studio, the dog inspired the sculptor to continue to tell the stories of dogs through his works. 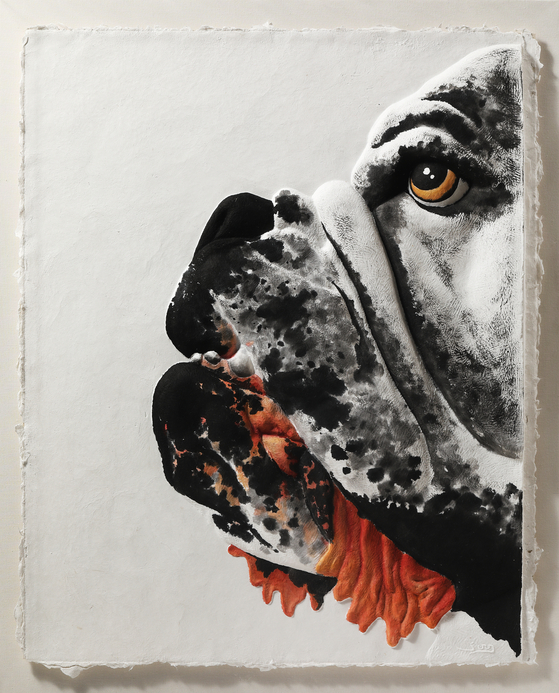 Some of the other works by Joo which center on the theme of stray dogs. [PARK SANG-MOON]


Joo's animal-shaped pieces are made with terracotta. Although he has faced financially challenging times, sometimes unable to afford supplies to create his art, he still finds joy from working with clay and realized that he is the happiest and most comfortable when he is surrounded with the material.

He also enjoys teaching others. So far, he has taught over 2,000 students and sometimes he does it for free. Such an idea to give back to those in need comes from his father's teachings. His father always told him to be nice to others and share, and to be content living a life without material things.

Although Joo’s father has passed away, his teachings remain alive through his son's artwork. With his memories of playing with cows evoked by the Year of the Cow, it is clear the Joo's love of animals is unlikely to falter anytime soon.