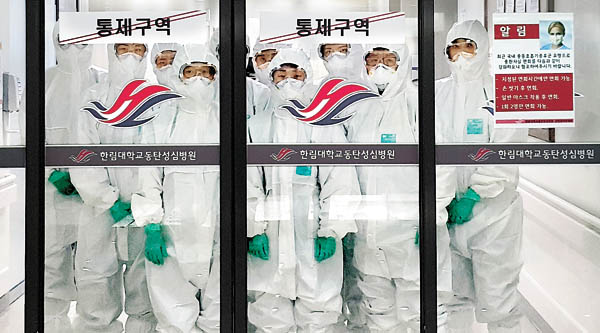 Hallym University Medical Center is under quarantine on June 12 due to the outbreak of Middle East respiratory syndrome. [HALLYM UNIVERSITY MEDICAL CENTER]

A 68-year-old man returned to Korea from a business trip to the Middle East, started to feel ill and visited three different medical facilities and the emergency room of a giant hospital in Seoul. Middle East respiratory syndrome (MERS) had reached Korea - and was starting to spread. Ultimately it would kill 38 people, make 186 sick and lead to the quarantine or house arrest of 16,700 more - and do more damage to the Korean economy than the mournful aftermath of the sinking of the Sewol ferry in 2014. More than 80 hospitals visited by MERS patients were shut down. Over 2,000 schools were temporarily closed in June. The tourism industry suffered a colossal loss of foreign visitors, especially from China, who were afraid they’d catch the disease. Korea learned that it doesn’t have enough epidemiologists and that its emergency rooms had sloppy procedures that helped the disease spread. The only good news was that the mortality rate for the outbreak was only 20.4 percent, around half that in outbreaks elsewhere in the world. Most patients who died succumbed to underlying diseases or conditions.


The problem of how to deal with the surviving “comfort women” - victims of forced sexual slavery during World War II - bedeviled Korea-Japan relations for years. Both countries were eager to find a solution before the end of 2015, which marked the 50th anniversary of diplomatic relations between the two and the 70th anniversary of the end of World War II. Four days before the year ended, they announced a landmark deal. Japan refused to budge from its position that a 1965 agreement had settled all claims from the past, but it agreed to set up an $8.3 million fund for the comfort women from Japanese government money, which it had never offered before. Shinzo Abe expressed his remorse as the prime minister of Japan. Diplomats all around said it was probably the best deal Korea could have ever gotten. The comfort women, however, insisted that any compromise with the country that brought them such pain was unacceptable and said they’d continue their fight for legal restitution.

3. U.S. envoy slashed in attack by a Korean


At a breakfast forum on March 5 at the Sejong Center for the Performing Arts in downtown Seoul, the soup was being served as U.S. Ambassador Mark Lippert, in his fifth month on the job, stood up to take a handshake from a guest. Kim Ki-jong, 55, started stabbing at Lippert with a 25-centimeter (9.8 inch) knife. 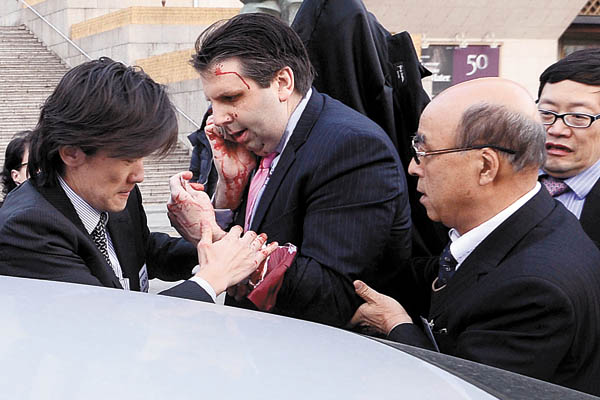 U.S. Ambassador Mark Lippert is slashed on his right cheek in an attack in March during a breakfast forum.

Kim, clad in a modern version of hanbok (Korean traditional dress), shouted demands that Korea-U.S. military drills be stopped. If he hadn’t been pulled away by other people, Lippert might have been killed. Lippert underwent surgery and had 80 stitches to his face and serious injuries to his left arm and fingers. Kim, who has a history of attacking foreign embassy people, was sentenced to 12 years in prison for attempted murder, assaulting a foreign envoy and violating the national security law. The prosecution, which sought a 15-year prison term, said it would appeal. Lippert and his family maintain the attack did nothing to change their fondness for Korea.


4. State-penned history textbooks approved
After years of preparation, the Park Geun-hye administration moved on Nov. 3 to go ahead with a highly contentious plan to oversee the publication of state-authored history textbooks. State control over Korean history textbooks was first put into effect in 1974, under the military rule of Park Chung Hee, the current president’s late father, and ended in 2010.
<>That means that once state regulated materials are introduced in 2017, the current system, in which schools choose from a range of textbooks approved by the Ministry of Education, will have been in place for just seven years.

The government has argued that current textbooks contain leftist, pro-North Korea biases and vowed to produce middle and high school textbooks that will supposedly be more accurate and objective. The decision prompted strong resistance from liberal politicians, teachers and historians; but despite nationwide protests, the government went ahead with the project, forming its own team of authors.

The Korean economy had a dire year of low growth and flat prices, raising the very real fear of a period of Japanese-style stagnation setting in. Exports declined every month from January through November and a decline is expected in December’s figures. The drops got bigger as the year went on. A slowing Chinese economy was a major factor, as was low oil prices, which affect Korea’s petrochemical exports. Other exporters suffered similarly: total world trade shrank 12 percent from January through September compared to a year earlier.

But in Korea, domestic consumption was hit hard by Middle East respiratory syndrome outbreak in May, June and July as people stayed home to avoid getting sick. The government had retailers throw big discount events like the U.S.’s Black Friday in a bid to boost consumption. The Korea Development Institute said the economy would grow 2.6 percent by the end of December, cutting its earlier forecast of 3 percent.

Presidential hopeful Ahn Cheol-soo, the former co-founder of the main opposition New Politics Alliance for Democracy (NPAD), announced on Dec. 13 that he was leaving the party. Ahn’s defection came after negotiations with incumbent NPAD Chairman Moon Jae-in over the election of a new party leader fell through.

Ahn’s move has guaranteed a shift in the political landscape in the lead-up to April’s general election and since spurred other liberal lawmakers to leave the party to create a new political movement.

The software mogul-turned-politician said on Dec. 22 that he would create a new political party by early February as part of a wider plan to win at least 100 seats in the general election and take the presidency in 2017.

Since his departure, seven other lawmakers have left the main opposition to join him. Veteran politician Kim Han-gill, with whom Ahn formed in the NPAD in 2014, has also expressed his intention to exit the party to join him. If Ahn and his supporters manage to recruit more than 20 lawmakers, their new planned party will become what’s known as a negotiation bloc inside the National Assembly, which will receive higher state subsidies than smaller parties and can send representatives to negotiate legislative calendars.

Hinging on the success of Ahn’s plans, the political turmoil is likely to continue into next year.

North and South Korea entered a quasi-state of war after land mine explosions inside the demilitarized zone maimed two South Korean patrol guards on Aug. 4. Border tensions rose to the highest level in years after the blasts as South Korea resumed loudspeaker propaganda broadcasts along the heavily fortified border fence facing North Korea. In response, North Korea fired four rounds of shells across the border on Aug. 20, which led to a brief exchange of fire on both sides. Pyongyang declared a quasi-state of war on Aug. 21 and issued an ultimatum to Seoul to halt the blaring broadcasts by 5 p.m. on Aug. 22. In an attempt to ease rising tensions, the two sides held an emergency high-level meeting in the border village of Panmunjom and reached a six-point joint agreement after 43 hours of talks.

In the agreement, the North expressed regret over the explosions and lifted its quasi-state of war status. In return, the South silenced its loudspeaker broadcasts. The two also agreed to hold reunions of families separated by the 1950-53 Korean War. The reunions took place from Oct. 20 to Oct. 26, for the first time in more than a year. The two sides have yet to arrange what will be the 21st family reunions because of different positions on resuming the Mount Kumgang tour which has been suspended since 2008.

Sung Wan-jong, the former chairman of Keangnam Enterprises and a former ruling party lawmaker, sparked a political firestorm earlier this year when he committed suicide on April 9, leaving behind a note that implicated eight high-profile politicians in a massive payoff scandal.

Those implicated in the note included core members of the Park Geun-hye government, including former Chief of Staff Kim Ki-choon and Prime Minister Lee Wan-koo. The list, found in Sung’s jacket pocket, contained names written next to the monetary sums the late construction tycoon was alleged to have paid them.

Lee was suspected of taking 30 million won ($25,620) in bribes from Sung and stepped down from his position on April 27, to become Korea’s shortest-serving prime minister with a term of just 70 days.

Of the eight politicians implicated, only two, Lee and South Gyeongsang Governor Hong Joon-pyo, were indicted for violating the Political Funds Act.

Lotte Group’s fraternal battle started as a family squabble over control of the retail group and evolved into a major feud that led to a change in company’s corporate structure. The battle began when Shin Dong-joo, the older son of founder Shin Kyuk-ho, attempted a coup against his younger brother Shin Dong-bin, chairman of Lotte Group. Along with the founder, the older son attempted to fire six board members of Japan’s Lotte Holdings, including Chairman Shin. In response, Chairman Shin dismissed his father as CEO of Lotte Holdings. The high-profile battle exposed an opaque corporate governance and the family’s dynastic hold over management decisions. The public was surprised at how Japanese the Shin family is: Shin Dong-joo has trouble speaking Korean. Chairman Shin vowed to clean up the conglomerate by listing Hotel Lotte, a de facto holding company of Korea’s Lotte operations. The group is now eliminating complex cross holdings among Lotte affiliates.

The Constitutional Court in February struck down a 62-year-old law against adultery that had made Korea one of the few non-Muslim countries that punish cheating husbands and wives with prison terms, reflecting changes in a culture that now stresses the importance of individual rights. In a landmark 7-to-2 decision, the court declared Article 241 of the criminal code, which was written in 1953, unconstitutional because it infringes upon people’s privacy rights and sexual freedom.

Immediately after the ruling was announced Feb. 26, the law lost any legal validity, freeing around 600 people being prosecuted for adultery. Under the law, spouses caught cheating faced up to two years in prison, and a third person involved in an affair was also subject to legal punishment even if he or she was unmarried. In a joint opinion, five justices said the law had strayed from its original intention of deterring extramarital affairs and was being misused by estranged spouses in divorce trials as a way of winning more assets in settlements.

The two judges who opposed repealing the law warned its abolishment could lead to increased sexual misconduct.