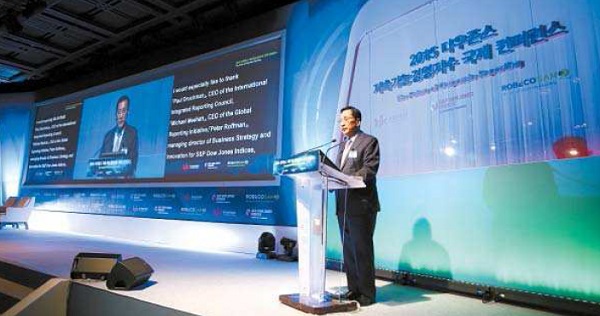 Lotte Shopping was the only distribution conglomerate to have been listed on the Dow Jones Sustainability Index for seven consecutive years. [LOTTE SHOPPING]

According to this year’s 2015-16 Dow Jones Sustainability Index (DJSI), Korean companies overall saw improvements in “human resources,” while continuing to be weak in “ethical management.” But Lotte Shopping, DGB Financial Group and Kangwon Land managed to excel in both categories, continuing their long history of stable evaluations by the DJSI.

Lotte Shopping is the only domestic distribution company to see its name on the DJSI for more than seven years. Moreover, the company has topped the global list in the distribution industry sector for five years running, proving its global competence in sustainable management.

Lotte currently runs an “Eco Shop” in two of its main Lotte Department Store branches in Sogong-dong and Jamsil. The shop exclusively sells eco-friendly products and donates all profits to environmental funds. In 2014, Lotte Shopping adopted the “Green Card Eco Money” mileage system, which discounts the prices of products officially recognized as “eco-friendly” by the Ministry of Environment by between 1 and 5 percent.

Mutual development is another keyword in Lotte Shopping’s sustainability strategy. In 2014, the company launched the “Dream Plaza,” which features quality products made by small and medium-size Korean companies who have had difficulty finding distribution channels. For small manufacturers located in Busan and South Gyeongsang, Lotte Home Shopping opened the “Smart Studio.” Located inside the Busan Creative Economy Center, the office provides services from content manufacturing and consulting to developing distribution channels both online and offline.

DGB Financial Group, formerly Daegu Bank, was the first local bank in Korea to be listed on all three DJSI indices, and has been on the DJSI Korea and DJSI Asia Pacific indices for seven and six years, respectively. As the company changed its name and expanded in 2011, the bank’s sustainability management principles expanded to other affiliates.

Although DGB’s expertise is finance, the group has been investing in eco-friendly fields for a long time, adopting them as part of the group’s brand image. Even before its transformation into a financial group, Daegu Bank opened the DGB Cyber Green branch in 2011, which has since been the headquarters for the group’s environmental activities.

As a way to give back to its community, DGB Financial Group provides education, consulting and employment opportunities for Daegu residents based on its expertise in finance. Along with finance education sessions and camps for young students, the group also holds the “DGB Happiness Concert” every year for seniors, providing them with information and one-on-one consulting sessions with specialists about retirement planning.

Kangwon Land, a resort and casino company based in Gangwon, is a relatively new player, listed on the DJSI for the third time this year. The company sets three keywords as its operating principles: public interest, creativity and happiness management.

This domestic leader in the casino industry has created programs to encourage customers to gamble responsibility. Frequent visitors are given electronic cards that limit their spending per day while offering them access to exclusive gaming zones.

Happiness management signifies the company’s determination for mutual growth with affiliate partners. Kangwon Land takes into account the efforts of its affiliates to do everything from improving work environments for employees to minimizing the possibility of on-the-job accidents. From this, the company has created the “Service Level Agreement” with partners, a comprehensive evaluation system that rates them from one to five in areas like safety and transparency of operation. For those partners that acquire positive results, Kangwon Land offers incentives or contract extensions.