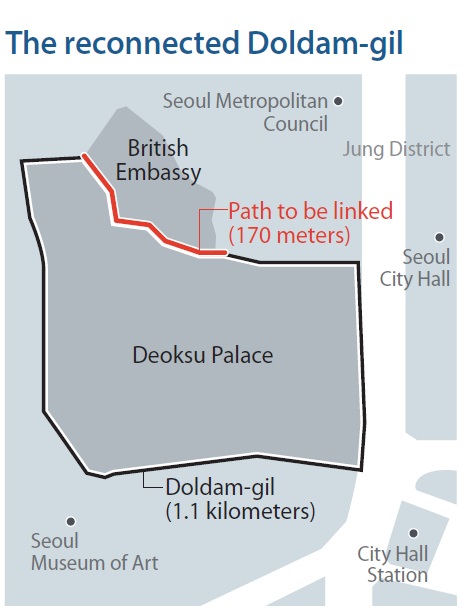 The scenic Deoksu Palace Stonewall Road, or Doldam-gil, truncated by the British Embassy lot, will be linked again for the first time in 132 years, according to the Seoul Metropolitan Council.

Choi Pan-sul, a member of the council, said Monday that a 170-meter (558-foot) pedestrian pathway in front of the British Embassy in central Seoul will be joined with the winding Doldam-gil by the end of the year. Doldam-gil, a 1.1-kilometer stretch, has been splintered ever since the Embassy of the United Kingdom, located on a lot adjacent to the British ambassador’s residence, was built in 1884.

The romantic stonewall road, which encircles Deoksu Palace and runs through the heart of Jeong-dong, is frequented by local pedestrians and tourists and is close to other cultural spots in the area, including the Seoul Museum of Art and the Seoul Museum of History. Built using eco-friendly materials, the road is lined with over 20 benches and 130 trees.

Currently, pedestrians can walk from Deoksu Palace’s main gate, or Daehanmun, to Cecil Theater and from the main gate to Chungdong First Methodist Church. Proposals to restore Doldam-gil have been floated over the years, but it was in November 2014 when Seoul Mayor Park Won-soon and former British Ambassador Scott Wightman began official discussions to link the path again upon the request of the metropolitan government to the British Embassy.

Last May, the Seoul Metropolitan Government signed a memorandum of understanding (MOU) with the embassy to launch the project to restore the Deoksu Palace Doldam-gil. The city said payment will be completed by May and it will start construction on the path, to be finished within the year. The project will cost the city government some 2.8 billion won ($2.3 million), and there is ongoing discussion on whether the British Embassy will be reimbursed for the land to be used to build the path, which is expected to be between 3 to 6 meters wide. The city council said that once Doldam-gil is linked again, they will install LED lights and improve the scenery which will cost another 570 million won. “We look forward to improving the image of Seoul as a historic and cultural city through restoring the Doldam-gil and illuminating the path,” said Choi, adding that it was an opportunity for “Korea and the United Kingdom’s friendly relationship to deepen.”