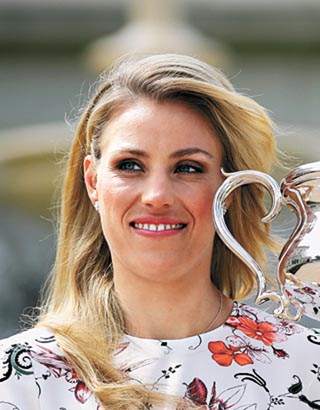 MELBOURNE, Australia - After all the advice Steffi Graf gave her, Angelique Kerber was able to return a favor to the retired champion on Saturday.

Graf’s record of 22 Grand Slam singles titles in the Open era is intact - for now - after Kerber staged a stunning upset of No. 1-ranked Serena Williams to win her first major at the Australian Open.

It means Williams’ tally of majors stays at 21 and the list of Grand Slam champions gets an elated and exuberant newcomer.

“This is the first big tournament of the year, and I won it, the first Grand Slam. It sounds crazy, but I can say I’m a Grand Slam champion now,” said Kerber, who was in a final for the first time in 33 major tournaments. She was still wide-eyed and in disbelief two hours after beating Williams 6-4, 3-6, 6-4 in a tense and often riveting 2-hour, 8-minute match.

The win will elevate Kerber to a career-high ranking of No. 2. She was seeded seventh in this tournament.

“With this victory you have not only fulfilled your own biggest dream but also, once again 17 years after Steffi Graf, the hopes of millions of tennis fans of a German winning the Grand Slam tournament,” Merkel said in a statement. “It was fascinating to see how courageously and, with such nerves of steel, how you prevailed in the final against arguably the best player in the world.”

Heading into the Australian Open, the big question was whether anyone could beat Williams, the defending champion going for her seventh win at Melbourne Park. A few names were tossed around, but not Kerber’s.

Kerber had been in the Top 10 for four years and her best result at a major was the semifinals at 2012 Wimbledon and 2011 U.S. Open.

“When I played here the first round I was match point down so I was actually with one leg in the plane to Germany and now I’m here,” Kerber told the crowd in the 15,000-seat Rod Laver Arena. That close call made Kerber feel she had nothing to lose. And that’s how she played Saturday night in the biggest match of her life.

Williams was not at her best. But Kerber chased everything down, ripped ferocious cross-court winners and took a lot of risks.

In the sixth game of the third set, which went over 10 minutes, she was a game point down and produced a beautiful backhand drop shot from the baseline that drew roars and applause. And a few points later, she did it again before breaking Williams to take a 4-2 lead.?