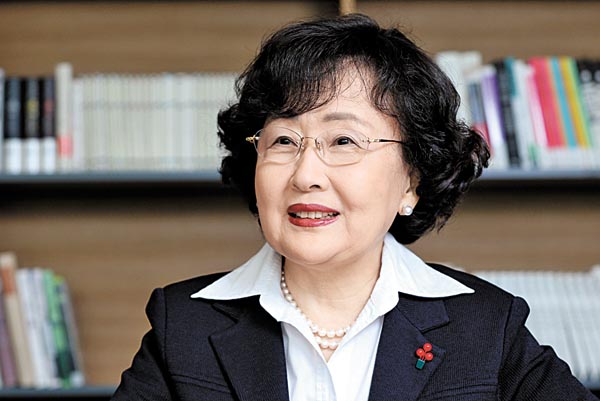 Kim Myung-ja, a former environment minister and presidential nominee for the Korean Federation of Science and Technology Societies, says she hopes to create an environment where the younger generation can proudly study scientific technology. [KANG JUNG-HYUN]

Kim Myung-ja, a former minister of environment, has been nominated as the new president of the Korean Federation of Science and Technology Societies (Kofst). She will become the first female president of the organization.

“I will try to help Kofst become a trustworthy organization by communicating with citizens,” Kim said in an interview with the JoongAng Ilbo Thursday. “Support from the citizens is necessary for us to prosper in science and technology, and the organization will try to solve some of the national issues, such as social polarization and the unemployment rate, by expanding our research on the related topics.”

Kofst was established in 1966 and has been representing nearly five million scientists around the world. Eight hundred academic associations and research institutes - making up nearly 40,000 regular members - as well as 12 regional federations in the nation and 17 Korean scientists’ organizations around the world are members of Kofst.

Kim will serve one year as the presidential nominee and lead the organization for three years starting next year. Kofst nominates the new president a year ahead of his or her term in order for nominees to acclimate to the organization by attending various events and board meetings.

The former environment minister received 60 out of a total 83 votes in the board of directors meeting on Tuesday. “I believe the board members thought highly of my 45 years of experience in academic circles, government and non-governmental organizations,” Kim said.

It was her second time running for the seat. During her last bid in 2013, she was head of the Korea Federation of Women’s Science and Technology Associations, which is a member of Kofst.

“I barely felt the gender gap as a woman since I went to co-educational schools and have been actively involved in various social communities,” Kim added, “and some of my female colleagues have wanted me to run for president, since the organization never had a female president in its 50-year history.”

She finished second out of five candidates in 2013 and finally achieved her goal three years later.

Kim was an expert committee member of the Presidential Advisory Council on Science and Technology from 1997 to 1999, and served as environment minister under the Kim Dae-jung administration from 1999 to 2003. She was the first female minister to serve for that long in Korea.

She was a proportional representative during the 17th term of the National Assembly and led organizations such as Green Korea 21.

Kim sent out a large number of emails while she was running for president of the Kofst. It was said she sent more than 40 emails each to 90 board members during her month and a half long campaign.

“I wrote about what I have done so far, and attached articles that local media outlets have published on me to help board members understand who I am,” Kim said in the interview. “Many suggested I talk to them in person, but that is just not my style. I did the same thing as in the past campaign.”

Many say she has been very passionate about science and technology for a long time.

“I take public transportation and walk a lot,” she said. “I have been doing it since I became a proportional representative, and I will continue to do so, since the new job will be an unpaid one.”

After the interview, which started at noon and lasted for about an hour, she headed to Seoul Station. “I am going to Gwangju to attend a regional Kofst workshop, and I will try to help local regions prosper with their own economies and cultures,” she said.

Missing lunch because of the interview she said, “I will get a lunch box on the train.”