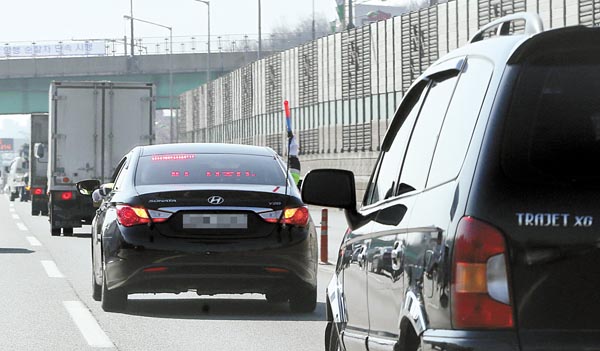 Undercover police cruisers look like ordinary vehicles on the outside, but once they spot a driver violating traffic regulations, they transform into police cars, equipped with sirens, lights and electronic sign boards. Police began a trial run of the undercover cruisers Tuesday on the Gyeongbu Expressway, and plan to expand operations to 11 expressways by the end of the year. [KIM SUNG-RYONG]

“I’ve never seen a police car that looks like this!” a stunned Mr. Chae exclaimed as he handed over his driver’s license to a police officer.

The 44-year-old was pulled over by a black Sonata on Tuesday on the Gyeongbu Expressway for driving in the bus-only lane with just his mother in tow. Bus-only lanes require vehicles to carry more than six passengers.

The National Police Agency dispatched two undercover police cruisers with two police officers each on Tuesday to a 134 kilometer (83.3-mile) section of the Gyeongbu Expressway from Yangjae Interchange to Sintanjin Interchange.

Their main task was to watch out for traffic violations that usually escape the watch of highway cameras and police on patrol. Those include driving in bus-only lanes with less than six passengers in the car, using a cellphone while driving, speeding and reckless driving.

After testing the undercover cruisers into June this year, the police plan to expand operations to 11 expressways by the end of the year.

From 9 a.m. to 5 p.m. on Tuesday, the cruisers caught 13 drivers driving in bus-only lanes with less than six passengers or using their phones while driving. Once a traffic violation is detected, the police turn on their siren and switch on an electronic board on the back of their cruiser that reads, “Police! Pull over.”

One of the 13 drivers stopped included a 45-year-old man surnamed Kim, whom police had been pursuing over suspicions of property damage and fraud. He was arrested on site and put in the custody of the nearest police precinct.

The police used undercover cruisers at one time, but that was put to a stop in the early ’90s in response to fierce public backlash over hidden speed cams and other “police trap” tactics.

Aware of that history, police on Tuesday were careful to explain to the drivers why they had been pulled over in this way: “We are testing a new system of undercover police cruisers. You can expect to see us more often,” one officer said.

Undercover police cruisers can be identified by the magnetic police seal attached on the hood and front door. Police said they will keep them attached during the trial period to avoid confusion or public outcry.