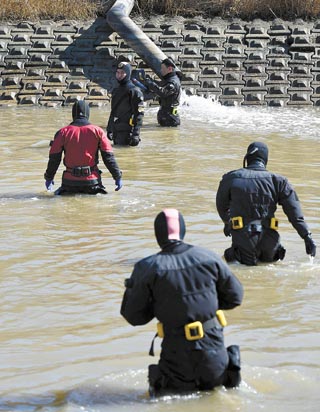 Police search for a missing boy in a waterway in Poseung-eup in Pyeongtaek, Gyeonggi, on Thursday. [NEWSIS]

A 7-year-old boy has vanished since he was apparently abandoned on the streets of Pyeongtaek, Gyeonggi, by his stepmother last month.

Gyeonggi and Pyeongtaek police are going full out to search for the boy, Shin Won-yeong, since Thursday, revealing his full name and photo to help find him. They are using drones to scour the area where he was last seen.

On Feb. 20, the boy’s stepmother, a 38-year-old woman surnamed Kim, walked Shin past an elementary school in their neighborhood in Pyeongtaek toward the South Korean Navy 2nd Fleet at around 11 a.m., police confirmed through CCTV footage Thursday.

Kim walked several steps ahead of the boy, who was last seen wearing blue Crocs, a padded jacket and black pants. 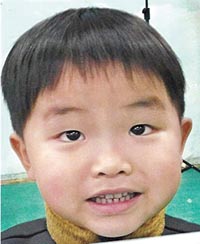 On Tuesday, Kim admitted to police that she was the woman in the footage and that she returned home alone that day.

Kim told police that she had been drunk and that she had taken the boy out but lost him. “When I looked later,” she said, “he was gone.” She blamed the boy for her spats with her husband.

The 38-year-old father was at work in his office that day.

Police believe the boy could be alive.

Kim did not tell them precisely where she allegedly abandoned the boy.

The area Shin was spotted in is hilly and around 1 kilometer (0.6 miles) from Shin’s home leading to the ocean. It is not frequented by civilians.

Police suspect Kim and Shin’s father of starving the boy and his older sister, hitting them chronically and locking them out of the house.

On Thursday, police dispatched three rescue dogs, a police squadron, 120 Coast Guard officers and 11 divers to hunt for Shin around the elementary school and waters near the fleet.

On Friday, police sent three drones from the Korean Drone Industry Association to look for the boy. The Gyeonggi Provincial Police Agency offered a reward of up to 10 million won ($8,400) for any tips on his whereabouts.

Gyeonggi police said it found two sweaters and a slipper by a Pyeongtaek port that may be related to Shin. One sweater was for a younger child and the other for a child older than 10 years old.

The police started the search for the boy on March 4 after receiving a report from a local elementary school saying the boy was supposed to enter as a first grader this semester but never showed up.

Authorities have been cracking down on the abuse and neglect of children after a series of cases of mistreated and even murdered kids.

On Thursday, two parents in their 20s from Bucheon, Gyeonggi, were arrested by police for beating and neglecting their 3-month-old daughter, leading to her death.

The parents, both 22, were accused of dropping their 3-month-old daughter on Wednesday, which led to her death.