Korea is both open and closed - and that’s good

Korea is both open and closed - and that’s good 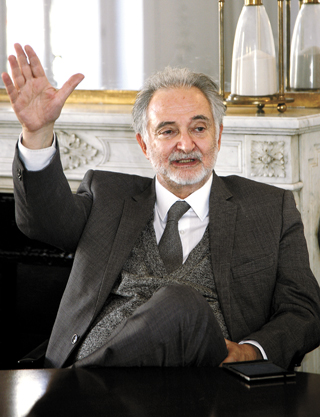 In a recent interview, Jacques Attali, the French economist and former adviser to President Francois Mitterrand, spoke of his “intellectual curiosity” about Korea, saying that what makes the country unique is its indomitable sense of identity.

The author of more than 50 books, Attali, who currently runs the nonprofit organization PlaNet Finance, believes Korea is destined for greatness, but the mills of the gods grind slowly, and there are many obstacles to overcome along the way. In his 2006 work “A Brief History of the Future,” he wrote that Korea may even become a world leader by 2050. During his interview, however, he mentioned several of the problems Koreans must face, including its declining population.

Attali, the founder and president of the international consultancy firm Attali & Associates, sat for an interview with the JoongAng Ilbo on March 7 at his residence in Neuilly-sur-Seine, a Paris suburb, ahead of his visit to Seoul for the inaugural Korea-France Leaders Forum to be held on March 24 at the Hotel Shilla.

The forum is part of a yearlong celebration marking the 130th anniversary of diplomatic ties between Korea and France, and will focus on strengthening cultural exchange, economic partnership, and science and technological education between the two countries.

Some 150 opinion leaders from Korea and France are expected to take part in the forum, including Henri Loyrette, former director of the Louvre Museum and the French president of the preparatory committee for the Korea-France Year; Cho Yang-ho, chairman of Hanjin Group, which runs Korean Air, and the Korean president of the preparatory committee; Stephane Israel, CEO of Arianespace, the world’s first commercial provider of spacecraft launching services; and Seoul National University President Sung Nak-in, among others.

The following is a translated excerpt of the interview.

Q. Why did you become chair of the Korea-France Leaders Forum?

A. I have a particular intellectual interest in Korea. Despite the world’s complexities, Korea is a distinctive place with a strong sense of self and, importantly, the ability to project that outwards. Korean culture has managed to stay true to itself despite external threats from neighboring global powers, and this speaks to me strongly.

Korean culture is known across the world, far and wide, but it’s also having a huge impact on next door such as China and Japan. It may be closed, but at the same time, it’s open. That’s why I have such intellectual curiosity about Korea.

Koreans consider you an “intellectual star” - 18 of your books have been translated into Korean, and many have become best-sellers here. What do you think is the reason?

Koreans, like me, have a lot of interest in the future. They’re inquisitive about the world of tomorrow, and so maybe my books provide a little food for thought.

In your book “A Brief History of the Future,” published here in 2007, you predicted that by 2050, Korea will become one of the world’s richest countries. Do you still hold such an optimistic view, especially since Koreans themselves generally don’t?

I didn’t say Korea will become the richest but that it could become the richest. Korea has the technical and cultural means to rise to the top by 2050. But, you have to consider that Korea may also fail, like Japan did. In 1990, there were a lot of predictions that Japan would become the No. 1 economic power by 2015, but nothing came of it. Japan wasn’t able to manage the process of opening up, and it brashly entered into economic competition with the United States. As a result, the Japanese structure collapsed and Japanese society had the wind knocked out of its sails. But, as I pointed out earlier, Korea is a country where openness and exclusiveness coexist, and because it remains somewhat closed, it can continue riding the waves.

Korea has an unequal structure, the elite class never changes and it’s suffering a sharp decline in population. There’s also the issue of women not being able to gain fair status in society. Half the population not being able to fully display their talents, but rather languishing in a state of partial paralysis, is a very serious problem. Furthermore, South Korea faces the uncomfortable issue of unification. Korea may become a global power by 2050, but to do so, it must find solutions to these issues.

What is France’s most urgent reform issue?

Education reform is the most important, especially kindergarten education.

Do you see that China will become a hegemon that will someday replace the United States?

I don’t see that at all. China, was never a hegemon, nor does it wish to be … China historically has never pursued world domination. Rather, it has a history of being occupied. While it may pursue regional hegemony for the sake of local stability, it will never pursue global hegemony. Furthermore, Chinese culture isn’t a universal one but a self-oriented one. It goes to Africa and South America to secure raw materials, not because of a desire to take control.

What do you think is this generation’s biggest challenge, one that can maybe change the fate of the world?

The first challenge is climate change, and the second is the refugee issue. The third is employment. But these three issues can be solved if rule of law is globally realized. However, if a will to resolve these problems isn’t demonstrated on a global level, it will lead to chaos, the closing of borders and war.

It isn’t an easy feat for Korea to maintain a balance between the United States and China. Do you have any recommendations for Korea?

You can’t forget about Russia. It’s important to feel threatened. In some sense, threats can be thought of as a condition for life, and from them springs strength. If there’s something I want to say to Koreans, it’s about the social structure I mentioned earlier. If Korea doesn’t achieve groundbreaking progress in this area, whether through the empowerment of women or the development of more sophisticated attitudes toward immigrants, Korea may end up losing this balance.

What do you predict for the future of cooperation between Korea and France?

Korea has a lot of similarities with France. We’re similar in population size, and we’re both surrounded by powerful neighboring nations. We’re also both countries with histories dating back thousands of years. Like Korea, France has been invaded many times, the difference being that France maintained its independence. But despite the many similarities between Korea and France, because we’re far apart, we have no rivalry. That’s why it’s so easy to cooperate more smoothly.