Traveler to Brazil is the first Zika case in Korea

Traveler to Brazil is the first Zika case in Korea 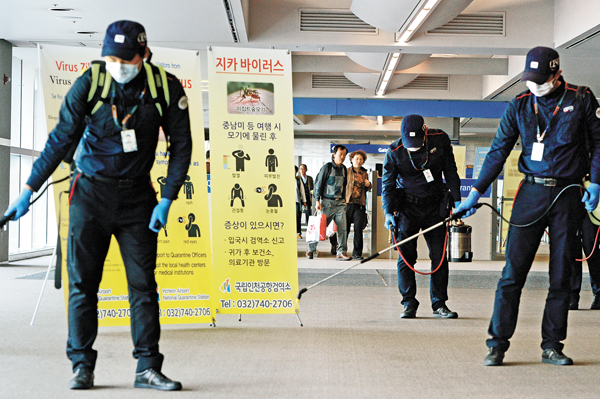 Workers spray terminals at Incheon International Airport after the first case of Zika virus was reported in the country on Tuesday. The patient contracted the disease in Brazil.[JUN MIN-KYU]

Korea reported its first case of the mosquito-borne Zika virus, which is especially dangerous for pregnant women, according to health authorities on Tuesday.

The Centers for Disease Control and Prevention (CDC) said that a 43-year-old man from Gwangyang, South Jeolla, who recently returned from a business trip to Brazil was diagnosed with the Zika virus.

According to the CDC, the man visited Brazil from Feb. 17 to March 9 and returned to Korea on March 11 after a layover in Germany.

On March 16, he came down with a fever and two days later visited a local clinic in Gwangyang. He told the doctor that he had visited Brazil, but was allowed to return home.

According to standard procedures, the clinic should have informed health authorities.

The patient began experiencing further symptoms such as muscle cramps and rashes and revisited the clinic on Monday. The Gwangyang Public Health Center was finally notified about the patient.

His wife and children are being tested as well.

“The patient was bitten by a mosquito during the business trip and did not have any suspicious symptoms when he returned,” Jung Ki-suk, director of the CDC, said.

The most common symptoms of Zika are fever, rash, joint pain and red eyes, which can last up to a week. But some patients have such mild symptoms that they don’t realize they’re infected.

The incubation period of the virus is around two to 14 days, and the CDC estimates the patient was likely to have been bitten by the mosquito around March 2.

The patient’s fever and muscle pains have disappeared and fever and rashes have subsided, and he is said to be approaching full recovery.

Jung said that the patient is well enough to be released from the hospital. The patient is currently staying in a single room at the Chonnam National University Hospital in Gwangju.

“He is the first case of a Zika patient in Korea, and we are monitoring him clinically,” Jung said.

The patient has not donated blood since his return from his business trip, so there is little likelihood that the infection would have spread through his blood.

According to the U.S. Centers for Disease Control and Prevention, the virus is primarily transmitted to people through the bite of the Aedes mosquito, which also spreads the dengue and chikungunya viruses.

Mosquitoes become infected when they feed on a person already infected with the virus, and they spread the virus to other people through bites.

The Aedes mosquito is not found in Korea.

The Zika virus can be spread by a man to his sex partners, according to the U.S. CDC. It has not been confirmed if it can be spread through blood transfusions.

Although the mortality rate for Zika is extremely low, there is no vaccine to prevent it or medicine to treat it.

The disease is feared because it may be the cause of microcephaly in babies, a genetic abnormality that causes babies to be born with very small heads.