Coalition of directors call for the freedom of BIFF

Coalition of directors call for the freedom of BIFF 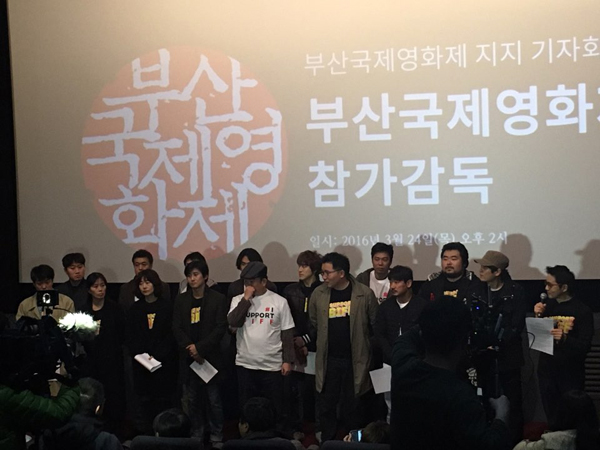 
A total of 148 Korean directors who have participated in the past 20 editions of the Busan International Film Festival (BIFF) demanded on Thursday that the city of Busan refrain from interfering with the leadership and independence of the festival.

At a last-minute press event at Seoul Art Cinema in central Seoul, 17 directors jointly read a statement lodging a strong appeal to restore independence to the beleaguered BIFF, which has acted as an incubator and meeting point for each and every director involved.

“BIFF has been like a protective fence for us,” the statement read. “The experience we had there helped us not only become better filmmakers, but also taught us to embrace different perspectives and grow into better human beings.”

It emphasized that such an experience was only possible because of the freedom they were allowed while creating films.

“However, there is no dignity or respect whatsoever to be found in BIFF today,” they said.

The 17 filmmakers who gathered at the press conference expressed their special affection for BIFF and described the bonds they formed through participating in the event.

“I screened my first film, ‘Sisters on the Road’ [2007], at BIFF, and the support and interaction I shared with the audience became a huge motivation for me afterward,” said Boo Ji-young, who also directed “Cart” (2014).

“It is not only me but also the audience who must have formed precious memories at the festival, but it feels very tragic that all of that is on the verge of being worthless because of what can be called a ‘political incident.’”

Rookie director Hong Seok-jae of “Socialphobia” (2015) also expressed concern over the fact that many would-be filmmakers in Korea might lose an important hub and opportunity to share their creations.

When the filmmakers were asked whether they were expressing their intent to boycott this year’s 21st edition of the festival like many Korean cineastes did on Monday, Kim Jho Gwangsoo, director of “Two Weddings and a Funeral” (2012), who emceed the event, said they still “believe that BIFF can be normalized.”

“However, if Busan Mayor Suh Byung-soo continues to threaten the festival’s freedom of speech, we are willing to share the intention of boycotting the event, because many of us are members of the film-related organizations that held the Monday press event,” he said.

The ever-growing tension between the Asia’s largest film festival and its host city began when festival director Lee Yong-kwan screened the politically controversial documentary “The Truth Shall Not Sank With Sewol” in 2014, despite the city government’s call to take it down.

Yesterday morning, Lee was summoned as a defendant at the Busan District Prosecutor’s Office for allegedly mishandling sponsorship fees. Whether he will be prosecuted wasn’t announced as of press time.