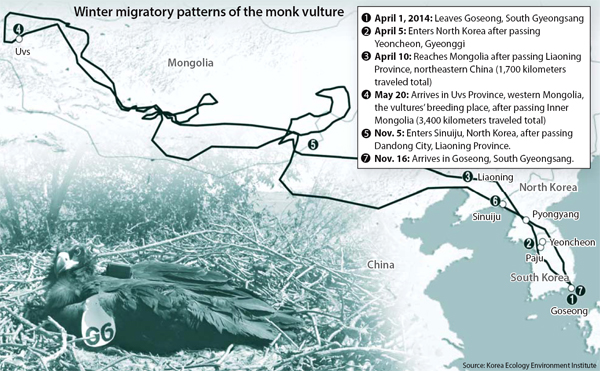 Vultures are steering clear of North Korea because it has no food, analysts from the Korea Ecology Environment Institute have said after tracking the species’ winter migratory patterns for five years.

Jangdan Peninsula, next to the military demarcation line separating South and North Korea, is the biggest wintering place for Eurasian black vultures, or monk vultures, which are listed by the government as a natural monument (No. 243-1).

The Korea Ecology Environment Institute began tracking the vultures in December 2011, when it tagged four vultures with Global Positioning System (GPS) trackers, with the help of the Cultural Heritage Administration. The vultures, found injured from dehydration at the time, were rescued and released after being tagged.

According to the institute, when migrating from Mongolia to Korea for the winter, vultures returned to the same spot each year, covering a maximum 340 kilometers (211 miles) per day and 1,700 kilometers overall.

According to Lee Han-su, head of the Korea Ecology Environment Institute, the vultures don’t fly by flapping their wings but by gliding. Therefore, in order to stay aloft they require thermals, or rising columns of air, which can form when wind blows over hilly terrain or mountain ridges. Thus, in chasing thermals, the vultures only fly over land and avoid oceans.

During their journey, hungry vultures were known to sojourn for as much as one or two weeks through the nearby plains of Liaoning Province, in northeastern China, to find food.

However, although they pass through the North Korean region near Chongchon River, the vultures made no stops and, despite Jangdan Peninsula being next to North Korea, the vultures didn’t fly over the inter-Korean border either.

“This seems to happen because in North Korea the vultures can barely find animal corpses which are major food resources for them,” said Lee, a 55-year-old ornithologist.

The vultures displayed similar tendencies in Mongolia, their breeding place. They inhabit only in the meadows where the nomads raise a large number of livestock, evading places with scarce food resources, such as the Gobi Desert, explained Lee.

The GPS tracking device is fairly accurate, its margin of error being less than 10 meters, and it uses lithium-ion and solar panel batteries that can last for three years while the device transmits data regarding the vulture’s location.

On the morning of March 16, two people from the Korean Association for Bird Protection brought about 2,000 chickens to a feeding place for the vultures. As soon as the truck left, wakes of hungry vultures, almost 300 in all, darkened the sky. After finishing their meal, the vultures scattered to the nearby hills in groups of three or four.

“By tracking vultures that winter in Jangdan Peninsula, Paju and Goseong, South Gyeongsang, we’re able to determine where they feed and where they spend most of their time there,” said Lee.

Every year, vultures die from food scarcity, poisoning and exhaustion, according to Han Gab-su, chairman of the Korean Association for Bird Protection’s Paju division.

“This research proves just how important the vultures’ winter feeding, which takes place in the civilian access control line, truly is,” said Han, 63.