King Sejong gets a new ‘spaceship’

King Sejong gets a new ‘spaceship’ 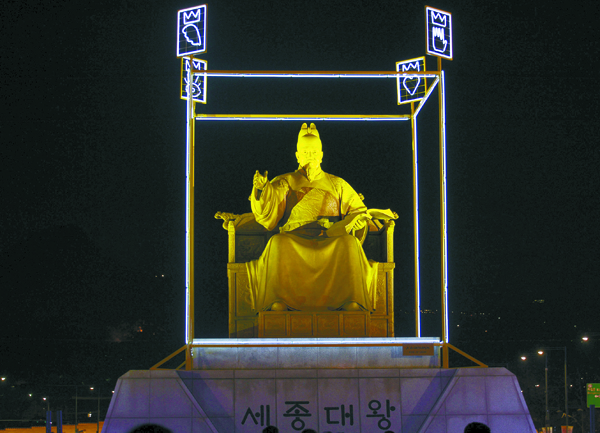 Jean-Charles de Castelbajac’s installation work “King of Signs,” which the artist erected around the statue of King Sejong in Gwanghwamun Square, central Seoul, lights up Thursday evening to mark the launch of the “Year of France” in Korea. [NEWSIS]

When the sun went down on Thursday, bright neon light began to shine on the statue of King Sejong in Gwanghwamun Square, slowly from his head to his feet, as if this great king of the Joseon Dynasty - the creator of the Korean alphabet - were being beamed up by a spaceship.

Some conservative types might have frowned at what was happening to their Sejong the Great, but it is in fact work of art created by renowned French fashion designer and pop artist Jean-Charles de Castelbajac.

“I wanted to send a message to the Korean youth - how such a heroic man from the past is not a fictional character but a real hero,” Castelbajac said, adding that King Sejong was indeed a pioneer who enjoyed both the arts and science and enjoyed learning everything passionately.

“He’s the king of signs, and I wanted this artwork to be an act of historical recognition, as an ode to Korean people and the youth.” 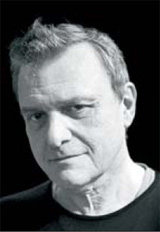 To mark the opening of the “Year of France” in Korea to celebrate the 130th anniversary of ties between the two countries, the organizers asked Castelbajac to create an artwork, and he came up with “King of Signs.” Similarly, in Paris last year, the Eiffel Tower was lit up with the colors of the Korean flag to mark the launch of the 2015-16 France-Korea Year.

“When I visited Korea for the first time 40 years ago,” the French artist said, “I became interested in the history of Korea. Now when I think about the history of Korea, the first man who comes up to my mind is King Sejong. He was a man with a vision, a man full of curiosity and a man who had a firm realization of democracy. He was a very knowledgeable king, and I wanted to make something special for this guy.”

This cubic “spaceship” Castelbajac built around King Sejong has four pictograms at each corner, which were inspired by the Korean alphabet, or hangul, and symbols for “to do,” “to love,” “to see” and “to dream,” which are a visual interpretation of a poem by Castelbajac in honor of Korea, according to the press statement.

“I wanted to express all the courage of this innovative country and show it with a profound message,” he said.

For the work, the artist was granted permission by Korean sculptor Kim young-won, who created the statue of King Sejong.

“King of Signs” will be in place until April 14.