Actress steals the show with her singing skills

Actress steals the show with her singing skills 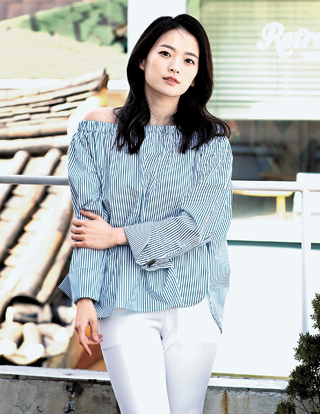 What certainly stands out in the upcoming movie “Love, Lies” is one of the lead actresses, Chun Woo-hee.

The 30-year-old belatedly rose to stardom in the controversial 2014 independent film “Han Gong-ju” and won the commercial Blue Dragon Film Award the same year, a laudable achievement for an actress who was just starting out. She competed with Kim Hee-ae from “Elegant Lies” and Jeon Do-yeon from “Way Back Home.”

Since then, Chun hasn’t stopped expanding her career, taking on both small and bigger roles.

But never has she flaunted as many different aspects of herself as much as her latest role, in which she sings, loves, aspires, fights and suffers.

Her character, Yeon-hee, is an aspiring singer in the 1940s who leaves gisaeng (traditional entertainer) training to sing pop songs that can resonate with even the most unfortunate. However, her harmless and sometimes thoughtless behaviors upset her best friend, So-yul (Han Hyo-joo), which later turns into a major dispute.

In the film, Chun performs songs, which she was able to pull off after training for four months. She even participated in writing lyrics for one of the main theme tracks, “Joseon’s Mind.”

“I thought I had to venture out for this film,” Chun said in a recent interview.

“A lot of people including those from my agency suggested doing something less heavy and less deep since my previous characters have been all like that, especially since the powerful image of ‘Han Gong-ju’ didn’t fade easily,” she explained.

Chun even told director Park Heung-sik that she didn’t want the rape scene in the film to remind audience of “Han Gong-ju.” In the controversial film, she played a victim of school gang rape.

“I am not trying to escape the image, but I don’t want to be trapped within in it,” she said.

Her character in the upcoming period film might be a little lighter, but that didn’t mean she had less work to do.

“The singing part was immensely stressful,” she said.

During the four months of vocal training, Chun said that expressing emotions through her voice was the toughest part.

“I could see my mechanical skills improving, but that did not mean I was conveying the emotion through it. Once, my vocal teacher told me that I sang like a stone, and at one point I felt like crying because I couldn’t grasp it even though I tried so hard.”

However, the final result was pretty satisfactory, she recalled. And it is actually one of the best parts of the film.

When asked about what direction she will take her career in, the actress admitted that her improvement was slower than others.

“But I always motivate myself to not stagnate even a single day,” she said. “I want to improve even a tiny bit from yesterday and step up even the slightest bit from my previous movie. That is always my goal, my motivation and inspiration.”

After “Love, Lies” comes out this month, she will return to the big screen again next month as a witness to a mysterious murder case in another big project titled “Goksung,” directed by Na Hong-jin of “The Chaser” (2008).

She doesn’t have to worry about stagnating, at least for this year.

“I may have become bigger and more famous now but it doesn’t necessarily mean that I can say everything I want,” she said. “Rather, my voice became smaller because now there are more people involved in what film I choose. But I am going to constantly instruct myself to be self-contained and select films that can satisfy the audience in various ways.”