Catholic priest finally gets the chance to vote

Catholic priest finally gets the chance to vote 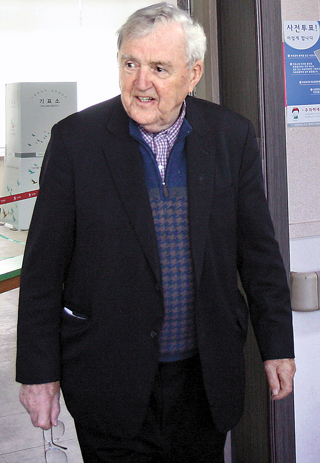 Last Friday, when the two-day-long early voting for the April 13 general election kicked off, Father Patrick Noel O’Neil, known to his parishioners by his Korean name, Father Chun Noel, cast his first ballot after 59 years of living here in Korea.

Father Chun, who is of Irish origin, was granted Korean citizenship last February by the Ministry of Justice for his dedication in increasing the human rights of handicapped people in Korea. He came to Korea as a missionary in 1957 and this is the first vote he has cast since then.

“I’ve been waiting for this day for 59 years, and I couldn’t wait for another 5 days,” said Father Chun, who is 89 years old. “So I went to the voting booth as soon as I woke up.”

He was the first to introduce a system called Group Home, where volunteers live with disabled people in order to promote their inclusion in society. In 1981 he established a group home, welfare centers and work places for disabled people in Gwangju, enabling them to become contributing members of society.

Father Chun, who’s helped about 1,000 people with disabilities stand on their own feet, was awarded a prize from the Minister of Health and Welfare in 2011, as well as a Community Development and Philanthropy Prize from the POSCO TJ Park Foundation in 2014. He’s currently the head of a social welfare corporation, the Rainbow Community.

The Emmaus Welfare Center in Unam District, Gwangju, which he founded in 1987, was designated one of the voting booths for early voting in the April 13 general election. The center was chosen as it is well-equipped with various amenities, including elevators for people with physical disabilities.

“It seems God has noticed how desperate I am to vote, since I got to vote in the very place I visit almost everyday,” he said.

Father Chun said he’s been reading carefully over the election bulletins in order to cast his vote to a party that promises generous welfare policies for the handicapped people and a candidate who’s considerate towards social minorities.

“The disabled people’s right to vote is rarely guaranteed and they don’t have many outlets to voice out their interest,” said Father Chun. “Ordinary people have to help the handicapped people by pushing the society to better listen to them.”

Before he became committed to working with disabled people, he worked at a cathedral in Jangseong County, South Jeolla, then in Haenam County and Gwangju for 14 years, where he spent most of his time inside the cathedral, tending to people’s spirits rather than doing outside activities.

Father Chun also spoke of the May 18 Democratization Movement in Gwangju, where he was the provost of a cathedral in Nongseong District, Gwangju, and was shocked to see the people being trampled by soldiers. He distributed food to citizen protestors and went from house to house to care for the injured.

While he was helping out, some people told Father Chun that he, as a foreigner, should not meddle in Korean affairs. That’s when he realized that one is only a true Korean when he or she has the right to participate in politics.

Father Chun, who described voting to be a “moral responsibility” of democratic citizens, expressed concern over Korea’s low voting rate.

When asked about his feelings after casting his first vote, he said, “Whenever I talked bad about politicians, I felt bad, but now that I have voted, I guess I can freely criticize them.”