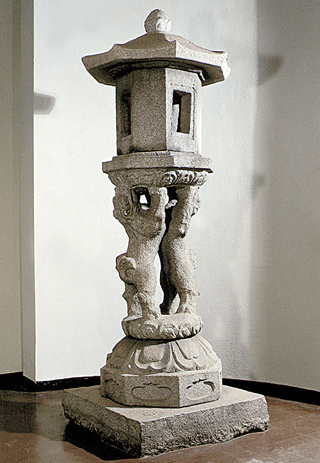 Korean Buddhism has a long tradition of setting up one or more stone lanterns symbolizing the all-pervading light of Buddha’s wisdom at temples.

Traditionally, Korean stone lanterns consists of four sections: a three-tier pedestal, the main body containing the light chamber, a roofstone, and the finial.

This particular lantern is characterized by a unique pedestal featuring elaborately rendered twin lions. The lions stand upright on their hind legs, chest to chest, supporting the upper pedestal with their front legs.

The light chamber stone placed on the upper pedestal has an octagonal shape and four light windows.

The stone lantern of the Unified Silla period (676-935) is generally regarded as a masterpiece, with its delightfully simple structure combined with elaborately carved animal sculptures.

The lantern was originally at Jungheungsanseong Fortress in Gwangyang, North Jeolla, but was moved to Gyeongbokgung Palace in Seoul after a plan to smuggle it into Japan was uncovered during the Japanese Occupation (1910-45).